From April 2015, every patient will have a named GP, who will be responsible for their care. Graham Clews reports on how the change will affect GPs, practices and patients.

Until a decade ago, GPs, even when away or otherwise unavailable, were held to be responsible for the care of their registered patients.

This 'vicarious liability' ended in 2004, but next year's GMS contract will go back to the future, by introducing a named and accountable GP for each patient by the end of March 2016.

The 2014/15 contract's unplanned admissions enhanced service gave all patients aged over 75 a named and accountable GP, but this time, the change will come with no specific funding attached.

Explaining the change in a letter to the profession, GPC chairman Dr Chaand Nagpaul said the process would be simpler than the over-75 agreement, with patients required to be told of the change at the 'next appropriate interaction'.

Practices will not have to contact patients, but by the end of March 2016, they must mention the named GP requirement on their website.

'For some practices that already operate personal lists, this will require no additional action,' Dr Nagpaul says. 'For most practices, clinical IT systems already have a "usual GP" status for patients.'

The major medical defence organisations do not see the introduction of the 'accountable' principle as likely to alter a GP's legal and professional responsibility for patients' care.

A spokesman for the MDU says: 'Even with a named GP in place, GPs will still be responsible for their own involvement in a patient's care, so it shouldn't make any difference in terms of where a patient directs their complaint or claim, for example. If anything, it could enhance patient care to have a named GP to co-ordinate care.'

In a statement, an NHS Employers spokesman says: 'The word "accountable" has been included due to the responsibilities attached to the requirement.

Family Doctor Association chairman and Swindon GP Dr Peter Swinyard says the contract change does not specify that patients will be seen by their allotted GP, so to some extent, it is a paper exercise. 'There's no reason why we shouldn't have it - in most practices, the patient can see the GP they want to most of the time anyway,' he says.

'Some patients don't mind which GP they see and some with continuing health needs should see the same doctor most of the time because it's good for the patient and good in terms of health economics, and these things tend to work themselves out.'

Dr Swinyard believes the introduction of named GPs is entirely separate from proposed seven-day working for GPs. The lack of any guarantee on appointments with named GPs means the two could sit together, although there is likely to be much greater opposition among GPs to seven-day working than to named doctors, he argues.

'Politicians are winding up the excitement among patients but they won't be able to deliver seven-day working without a considerable number of extra GPs,' he says.

They are not officially a 'named' GP, but Dr Watson says the system helps to determine who is responsible for a particular patient and ensures that treatment decisions for the patients do not fall between a number of stools.

The introduction of named GPs for patients aged over 75, therefore, has made little difference to how his practice is organised. Patients can already request to be allocated to a different GP if they choose, although few do so.

Under the proposed contract changes, either a partner or a salaried GP can operate as the named GP, and Dr Watson believes that a form of natural selection will mean 'popularity' among doctors at a particular practice will be evened out by their availability.

'Over the years, I've gone from working nine sessions a week to two days because of medicopolitical commitments,' he says.

'I have a loyal following, but many of my patients are willing to see other GPs in the practice because there is likely to be less of a wait.'

GMC advice on responsible doctors, issued in the light of the Francis report and aimed predominantly at hospital doctors, also includes GPs responsible for over-75s within its remit.

The advice sets out a number of factors for responsible doctors to consider in treating patients, including communicating clearly with patients and colleagues and not assuming someone else will do so, sharing relevant information that will help with continuity of care and taking responsibility when things go wrong, including providing a full explanation, and an apology if necessary.

'It's useful to have someone where the buck finally stops,' he says.

'It's what good general practice is about and I'm very pleased the government has recognised that.

This is a view shared by the BMA, which believes the named GP system will strengthen continuity of care.

Dr Nagpaul says: 'We believe that the notion of all patients having a named GP endorses the important personal link between GPs and patients, promoting continuity of care, and reinforces the value of our long-term contractual relationship with our patients.' 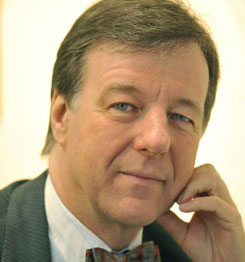 Patients are 'encouraged' to specify a doctor they would like to lead their care when they register with the practice, but if they do not choose one, they will be allocated a GP.

Patients are told they should book in advance if they want to see their named doctor, and told that they will not always be able to see their 'own' GP.

The practice has 12 GPs across five surgeries, who work in teams of four, and one GP from each team will always be on duty. This means that while a patient will not always be seen by their named GP, any test results or letters will always be seen by a doctor from their own team. Decisions on treatment will be taken by doctors from the team if a patient's named GP is away or unavailable.

If one doctor's list becomes full, it is simply closed and patients have to register with a different GP.