Current core GP funding arrangements do not properly recognise deprivation, a fact acknowledged at the highest levels within the NHS.

This discrepancy helps explain why about a fifth of the 98 practices worst affected by MPIG withdrawal are thought to be in east London.

GPs in east London led the campaign against MPIG cuts in 2014, but street protest alone will not win reform of practice funding.

Research by Dr Sally Hull and Dr Kambiz Boomla of the Clinical Effectiveness Group (CEG) at Queen Mary University of London suggests practices in one of the UK's most deprived areas have been underfunded by 33% because of the Carr-Hill formula's failure to recognise how deprivation affects GP workload.

'In any political campaign,' says Dr Boomla, 'what wins is a grassroots campaign allied to robust scientific evidence that people cannot refute.'

The problem with Carr-Hill became apparent almost before the ink had dried on the 2004 contract. Practices in poor, inner-city areas assumed they would receive above average funding in recognition of the increased pressures, but ended up worse off.

The formula is supposed to distribute core GMS practice funding in line with the weighted needs of patients, to reflect workload and relative costs of service delivery. It takes into account several factors determining workload, with the greatest weight placed on age/sex. Deprivation should be accounted for in that age/sex banding.

Data from east London practices show annual consultation rates by age and deprivation. The very youngest and very oldest see their GP at a similar rate across the deprivation quintiles. But for the group in the middle, there is roughly a doubling in consultations at a given age, or an approximately 20-year gap between when the poorest and the richest reach a given number of consultations. 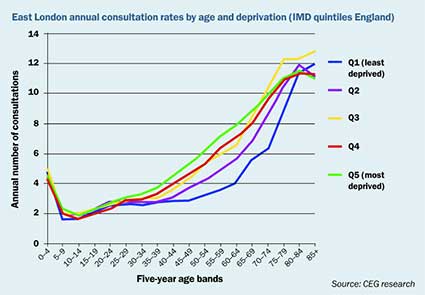 Measuring the age at which people become disabled reveals even greater disparities, with a gap of about 18 years between the disability-free life expectancies of the poorest and the wealthiest.

A sticking plaster solution, the MPIG correction factor, was devised to top up funding for practices that lost out in 2004 under Carr-Hill.

MPIG payments sit on top of Carr-Hill core income, so should eventually have been replaced as overall funding went up. Slow growth in GP funding in recent years, however, means about 65% of GMS practices remain reliant on the top-up.

The withdrawal of MPIG, imposed by the government in 2013, tore away that sticking plaster.

With all sides now agreed that Carr-Hill is flawed, and with primary care funding at the top of the policy agenda, GPs serving deprived communities say now is the time to find a permanent solution.

The 2014/15 and the 2015/16 GP contract deals pledged to overhaul Carr-Hill. The 2015/16 agreement says: 'NHS England and GPC will re-examine the Carr-Hill formula with the aim of adapting the formula to better reflect deprivation.'

The CEG research shows it is possible to measure the effect of deprivation on consultation rates and how that translates into funding.

Using data from practices across east London, the group examined consultation rates by age and sex for about 1m patients in 2013, broken down by index of multiple deprivation (IMD), linked to 'lower super output area' - the smallest, most accurate geographical unit.

It is the group in the middle, between the ages of about 40 and 70, where consultation rates diverge.

This can be expressed in two ways. Take a person aged 50; those in quintile five (Q5) - the most deprived - are consulting about seven times a year. Those in the wealthiest group consult about 3.5 times.

Or, take the age at which a given number of consultations is reached for each group: Q5 reach four consultations a year at about 40 years old, Q1 at about 60.

Sceptics, according to Dr Boomla, argue that despite the increased consultation rates among the most deprived, many of these consultations are minor, related to manual working and sick notes.

The CEG assessed the complexity of these consultations, measuring consultations where one of a basket of six blood tests commonly given to patients with multiple health problems was used.

To calculate the proportion of total workload these patients represent, the researchers allocated all patients an age and sex band and a deprivation band, standardised on the band that consults least. They worked out a deprivation-weighted workload index to replace the age/sex index in Carr-Hill.

They showed practices in Tower Hamlets provide 33% more consultations per patient for the population as a whole than the national average, because of additional workload generated by deprivation.

The calculations were applied for each practice across the borough, with similar results.

The reality, says Dr Hull, is that there is a finite funding pot and redistribution will be painful for losers, particularly when overall funding is not rising. 'You have to ask what is fair,' she says.

GPC chairman Dr Chaand Nagpaul has already met the CEG to discuss the work. He says NHS England is looking at Carr-Hill and the GPC will contribute to discussions.

The CEG work, he says, provides a 'compelling case to show patients in deprived populations can have the morbidity of older patients at a younger age'.

But, he adds, deprivation is not the only pressure not reflected in Carr-Hill. Practices in deeply rural, or with other unusual populations, are also suffering.

'We may need to recognise that the formula cannot be the solution for every atypical practice and there may need to be other funding streams to address those factors,' he says.

An extensive review of Carr-Hill by the BMA and NHS Employers was quietly ignored after being published in 2007. Among its recommendations was an adjustment for IMD by electoral ward.

The CEG work looks only at the age/sex element of Carr-Hill, recalculated with a deprivation weighting. Dr Hull and Dr Boomla say this demonstration shows such a calculation is possible and could be taken forward as part of an overall review of the funding formula.

'We do not have a strong view on how this should be taken forward,' says Dr Boomla. 'We are simply trying to put deprivation back on the agenda in the context of the phasing out of MPIG.'