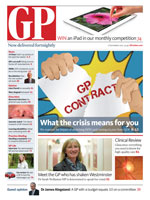 Editor Emma Bower (@EmmaBower) explains why and we give you a chance to win an iPad if you tell us what you think.

Our lead story and analysis examines the GMS contract crisis and reveals exclusively GPs are being laid off as income levels fall.

4. How GP magazine is changing to fit better with your working life

#weekinreview (the brainchild of web producer Aoife Lynch @AoifeMLynch) is a year old this week and to celebrate we've chosen our favourite moment of the last 12 months. Yes, it was our tiny role in cheerleading for Dr Kailash Chand's (@KailashChandOBE) anti-Health Bill petition which spurred former deputy prime minister John Prescott (@JohnPrescott) into song. Go Prezza! We're only as entertaining as the material you provide, tweet it to @neildurham.

Did you know each year 2500 people go to A&E because of injuries caused by tooth brushes...don't let it be you!

It's possible you've only just woken up and heard the important news. I'm growing a charity moustache. Sponsor me? uk.movember.com/mospace/1954756

A newspaper reported Dan Poulter’s ‘party trick’ is ‘disrobing’ and doing a ‘pecs dance’. If only he put the same energy into health brief.

A thumbs up from the NHS Commissioning Board's (@NHSCB) deputy medical director and Baggies' fan Professor Steve Field (@ProfSteveField) for the success of Inside Commissioning bloggers Warrington CCG (@WarringtonCCG):

Do you know your QUALYs from your CCGs?