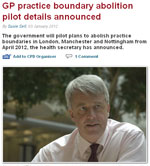 The DH announced £2m would be available to practices which volunteered to abolish their boundaries from April 2012 in London, Manchester and Nottingham. Although practices are thought unlikely to want to volunteer.

The conversation has been deleted but appears in #weekinreview courtesy of journalist TheBrettLeppard. 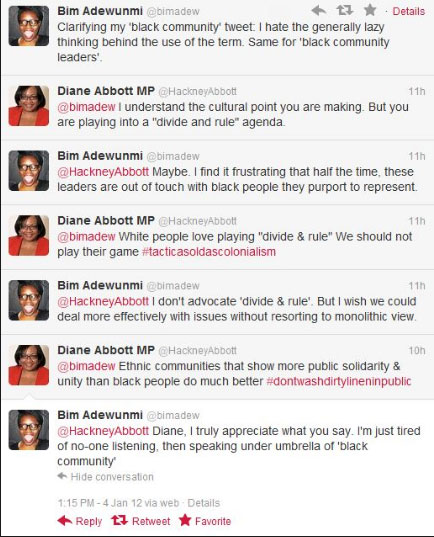 Here's the moment when Labour leader Ed Miliband called her live on Sky to let her know his thoughts, courtesy of @JamieWood_Sky.

The flashpoint for this debate may no longer be cancer drugs (the Cancer Drugs Fund has largely - if temporarily - defused this), but instead procedures of so-called limited value.  Such interventions can easily be provided privately (and at a relatively low unit cost), creating temptations for clinicians to boost private practices and leading to allegations of ‘top ups’ (an extreme example of this has already been seen at the Haxby and Wigginton Health Centre in York).  The challenge for the Government is that such interventions are rarely appraised by NICE and efficacy and cost effectiveness will vary dramatically according to patient circumstance: a patchwork of policies may well emerge.

'Such situations are tailor-made for so-called exceptional case panels, yet placing GPs in charge of this (which would be a job for clinical commissioning groups) could be a political nightmare – both for the Government and GPs.  It would make political sense to reach a national understanding of what will and won’t be funded, but doing so would inevitably attract accusations of cuts and rationing.  Yet taking the political heat now could prevent ongoing political pain later (and nearer an election).'

Maximum waiting times will get worse despite the new politically-motivated targets set by the Government in November 2011.

Several NHS hospitals will lose their 24 hour A and E departments – not because the Government have had the nerve to reconfigure them but because doctors will not go and work in dangerous parts of organisations.

Bungs and subsidies will go to a number of inefficient hospitals in order to keep their bankrupt heads above water.

Some Foundation Trusts will lose their authorisation.

Some previously enthusiastic GP-led commissioners will walk away from commissioning.

Oh, and since we will then be half way through the Parliament, the PM will have his single reshuffle and we will have a new Secretary of State for Health.' 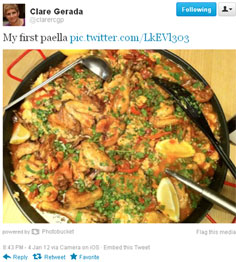 In other news, RCGP chairwoman Dr Clare Gerada (@clarercgp) was indulging in a rather surprising first. But not before Twitpic-ing it.

PCN clinical directors are facing burnout and struggling to develop their networks...

An online exhibition celebrating women’s contribution to general practice over the...

Plans to scrap the 'five-year rule' and categorise doctors with health concerns as...

General practice in England delivered 31% more appointments in June this year than...

COVID-19 vaccine map: Which CCGs have most fully-vaccinated adults?

Tens of millions of COVID-19 jabs have been administered across England, but progress...