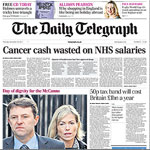 The story made the front page of Thursday’s Daily Telegraph, was featured in the Daily Mail, Times and Metro as well as an estimated 190 local newspapers.

Public sector workers including GPs strike on 30 November but #weekinreview regular @welsh_gas_doc is unimpressed by the BMA’s militancy.

He tweeted: ‘Thanks @TheBMA for the "Save our Pensions" stickers with this week's BMJ. That'll show 'em we mean business!!

It was a case of once a commissioner always a commissioner for Dr Steve Kell (@SteveKellGP), executive chairman of Nottinghamshire’s Bassetlaw Commissioning Organisation, who tweeted Thursday:

#weekinreview sympathises. It's been on that train more times than it cares to remember.

Should you agree you can sign up to back his call for a parliamentary debate on the issue.

Dr Iain Kennedy (@iaintrk) was in positive mood about the DoH employing the very latest in cutting edge interactivity to stimulate NHS debate.

GP columnist Paul Corrigan (@Paul_Corrigan) on the frankly rather astonishing news that health secretary Andrew Lansley provides welcome messages to patients on hospital televisions. His blog titled: ‘Lansley TV: Does he have the ‘X’ factor’ reads:

Now I’m not saying that when I was advising new Labour ministers on health reform that we didn’t sometimes do the wrong thing. Of course we did. But generally when someone came up with a really crazy idea someone would say: ‘Hang on – let’s just think about that for a bit longer shall we?’ A warning bell would go off in somebody’s head – and we would all calm down.

‘It is perhaps a measure of the trouble that Andrew Lansley is in that when he said: ‘I have this great idea of playing a continuous loop of me on every TV in all the nation’s hospitals’, that everyone around him appears to have said: ‘Great idea Andrew – lets do it!’

Form an orderly queue to make quips about Lansley doing his bit to beat bed blockers and delayed discharges.

In a week where the NHS Operating Framework was issued to shed light on all things monetary for clinical commissioning groups (CCGs), to the Nene Commissioning blog for a concluding ray of sunshine.

It reads: ‘A key challenge for us as CCGs is how we build confidence in those who are delegating responsibility to us that the way we want to work will be successful.  The more we do this, the less others will feel the need to try and control us. So maybe I will take it as a marker of my success when I start to be told what will affect my authorisation slightly less often.'

@Abi_Rimmer from the NHS Alliance conference in Manchester on Wednesday and Thursday.