GPonline.com revealed exclusively on Monday that the QOF in Scotland would be overhauled to focus on the country’s public health priorities under the Scottish government’s bid to negotiate much of the UK GP contract on its own terms.

The GPonline.com news team breaks for Christmas on 23 December and returns on 3 January 2012.

How to explain the HSBC in less than 140 characters

'#NHS A Christmas challenge for all you tweeters. Explain the HSCB in 140 letters.'

'A drive to put clinicians and patients at the heart of designing health services. (CCGs must be autonomous and not directed).'

'HSCB: an impatient new government aligns its principles to business, whilst trammelling over doctors and patients, to save money.'

'Recently sent a patient to counselling for their Kleptomania.Told me it was helpful, and that they took something valuable from the sessions.'

Labour chief whip in the Lords Steve Bassam (@StevetheQuip) was in no way reinforcing #weekinreview’s view that MPs get paid a great deal for achieving very little:

'Due to Govt incompetence the Commons has had nothing to do since Early November and won't until Queens Speech probably in May.'

'Asked by 4 patents to cure their colds before xmas. if I could do that i'd be a magician (and a millionaire...!)

GP columnist and former advisor to Tony Blair Paul Corrigan (@Paul_Corrigan) had a question for the BMA: When does the BMA seek to restrict the choices of its independent professional members?

He blogged: ‘I remember the great fear of the BMA during the summer of 2008 when they saw the state’s ‘herding’ of GPs into polyclinics as a gross intrusion into the rights of their members.

That makes the BMA’s stance on commissioning support for GP’s clinical commissioning groups not just a little odd but downright weird.

It is no secret that GP-led clinical commissioning groups are going to need expert help and support in carrying out their commissioning functions. Given these are GP-led organisations you might expect the BMA to stand up for the right of their members to employ whomsoever they wish. You would especially expect them to follow the BMA tradition of not allowing a state takeover of the right of GPs to independence.

But of course you would be wrong.’ 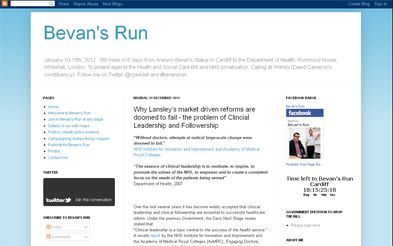 He blogged: 'I believe that deprofessionalisation and worries about the corrosive effects of privatisation are one of the main reasons why Lansley’s reforms are so unpopular and why there is so much medical opposition. This is why he will never get the medical profession on board and behind him.

'A few GP enthusiasts will not be enough to deliver the clinical leadership and followership required for successful reform. The reforms are therefore "doomed to fail". The sooner he realises this and withdraws the bill, the better. In fact, the sooner policy makers from across the political spectrum realise that delivering medical care is incompatible with markets, the better. There will never be effective NHS clinical leadership/followership and successful NHS reform, until the failed market based policies of the last 20+ years are abandoned.'

'First day of winter. The Arabic for winter is Shitta. Say no more.'

’Does any1 know the press office phone number for Diesel? Or complaints number? Any number? crappiest customer service i've ever experienced.’

'@MaxPemberton Dude they sell jeans and stuff. What's the worst that could happen.(I haven't been thin enough to wear diesel since circa2002)'

The MHRA has approved an updated version of the Moderna vaccine that targets both...

Majority of GPs back taking industrial action in the coming year, poll suggests

The majority of GPs support taking industrial action in the coming 12 months to push...

NHS England's winter plan does not include enough measures to support general practice...