Wednesday was World COPD Day and @gponlinenews featured exclusive PCT-by-PCT results from our investigation into the variability of the availability of gold standard treatment pulmonary rehabilitation courtesy of GP's news reporter @SH_Robinson.

The BMA proposed banning smoking in cars on the same day but @welsh_gas_doc wasn’t impressed:

Whilst pensions are being slashed, the NHS is being sold off and jobs are under threat…why are the BMA banging on about smoking in cars?

#weekinreview says why not just go the whole hog and ban cars?

Ever wanted to stick it to health secretary Andrew Lansley? Paediatric nurse Dan Bowen (@gracenglorydan) tweeted from the NHS Employers conference in Liverpool on Tuesday:

Just met Andrew Lansley - Secretary of Health at the #flufighter stand! V nice and friendly! Alas he had his flu jab so couldn't jab him!’

Co-chair of the NHS Consultants’ Association Clive Peedell (@cpeedell) is certainly not a fan of the Lansley/Nicholson reforms. He tweeted:

On a lighter note locum @GPforhire mused: ‘I should be the new Dr Who as when I phone my patients and tell them who I am they usually say "Dr who?"

And on a, perhaps, even lighter note south-east London and BBC GP Dr Rosemary Leonard (@DrRosemaryL) brought us full circle to cigarette bans again with:

Probably easiest to start with smoking in cars (and then banning cars), thinks #weekinreview. 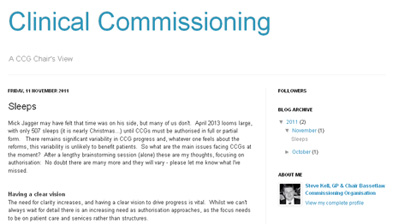 Mick Jagger may have felt that time was on his side, but many of us don't.  April 2013 looms large, with only 507 sleeps (it is nearly Christmas...) until CCGs must be authorised in full or partial form. There remains significant variability in CCG progress and, whatever one feels about the reforms, this variability is unlikely to benefit patients.'

Blog of the week to healthcare commentator Roy Lilley (@RoyLilley) who looks at the US popularity of accountable care organisations, how they might affect UK primary and secondary care, and whether they look suspiciously like PCTs. Clue: they do.

Look out for our coverage from the Policy Exchange event in London on the Future of the NHS featuring health select committee chairman Stephen Dorrell on Tuesday afternoon.

MIMS paediatrics conference is on Thursday in London and we're expecting the NHS Operating Framework to be published that day also.