GPs will be at the heart of a protest against the Health Act this weekend, says Medical Practitioners' Union (MPU) president Dr Ron Singer. Writing exclusively for GPonline, he warns that the reforms are turning the NHS into a 'raw, dog-eat-dog market in healthcare'.

GPs, other doctors and medical students will be heading a TUC march through central London on Saturday. We will be part of the large NHS contingent organised by Unite, the MPU's parent union. Our banner will be prominent (see picture). MPU doctors are continuing the fight for an NHS, oppressed by the new Health Act, keeping its core values of a comprehensive service free at the point of delivery.

Bad news for the NHS

MPU believes that the Health Act is bad news for the NHS. GPs are being used by the government to mis-inform the public that the NHS will be run by clinicians and will be designed ‘by the people that know you best, your GP’. 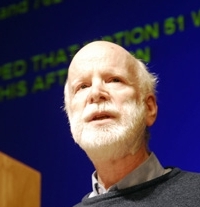 Clinical commissioning groups (CCGs) will not be run by GPs but by managers in CCGs and the commissioning support units (CSUs). Local services may be ‘tweaked’ by CCGs but the bottom line will be not to overspend the budget, which must gradually shrink as the NHS ‘savings’ programme rolls on, inflation outstrips any additions to the NHS budget and the private sector has to be paid its profits.

The fight against the Health Act during its passage through parliament was correct in its assessment of where the government wanted to take the NHS – into a raw, dog-eat-dog market in health care. Already private companies are contesting decisions that have gone against them in awarding NHS contracts costing NHS managers time and money.

This trend will grow as more contests for contracts are fought out within an ever more complex tendering, anti-competitive,  legal context. MPU says this is wasting scarce NHS money and time. CCGs leaders are meanwhile being tied up with regulations that mean their scope for changing and choosing local services is ever more limited.

GPs in CCGs are becoming only too well aware that their main task will be to cut and restrict local services to fit the budget – the exact opposite of government rhetoric. The CCG authorisation process is proving a hurdle too far for many CCGs as enthusiasm from both GP members and local practices dwindles.

Why does this matter to practices and their GPs? Because all GPs’ contract conditions change on 1 April next year. In order to continue as an NHS practice, the practice must become a member of a CCG. If a practice objects to any part of the constitution it will still have to join the CCG to stay in practice. If a practice has a major disagreement with its CCG in the future and loses the argument it will have to stay in the CCG anyway.

CCG managers and their GP leadership know this and so will feel emboldened to make whatever cuts they deem fit, pressure practices to refer less, stay open longer and at weekends and so on. The GPC has evidence from around the country that practices are being bullied into ‘signing’ constitutions that are not agreed locally and do not include involvement of LMCs (which many practices want to include) and contain potentially draconian performance management clauses. Even the head of the NHS, Sir David Nicholson, now says GP involvement of this type will end in tears.

I believe that CCGs will become more disliked by GPs than any former PCT because CCGs will have more power over GP performance that any PCT ever wished for!  Perhaps now is the time to consider withdrawing from CCG involvement before it becomes law to do so. For all these reasons, and because we want the NHS to stay publicly owned and delivered by people who care about the NHS as a service, we will be marching on Saturday.  Feel free to join us.