The sudden cardiac death (SCD) of an athlete is a tragic event for the individual and their family, but there is also a far-reaching impact on the rest of the sports community.

Such events, therefore, appropriately grab media headlines as well as public attention, and continue to ignite the debate regarding appropriate screening strategies to prevent SCD among sportsmen and women.

The unfortunate death of one of the London marathon runners in 2012, the much publicised case of footballer Fabrice Muamba and the increasing participation of the public in long-distance and charity runs all underline the need for clear guidance regarding pre-participation screening of athletes.

The role of 12-lead ECG in screening continues to provoke intense debate. This article reviews the epidemiology, aetiology and international screening strategies, and elucidates the role of primary care in screening. 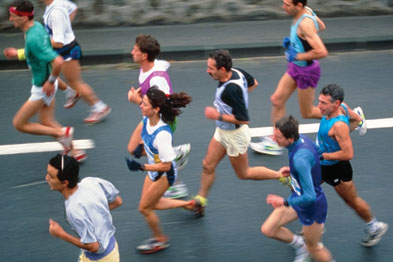 Long-distance and charity runs are becoming more and more popular, and GPs have a key role in helping to protect athletes’ health (Photo:SPL)

Epidemiology
Estimates of the incidence of sudden death among athletes have been variable and could be an underestimate, as they have depended on the actual population sampled, methods of sampling, age of the sportspeople and definition of sudden death.1

Sudden death has been described as relatively rare among athletes (a rate of <100 a year or an incidence of one to three per 100,000 athletes).1,2

However, SCD is the most common cause of mortality among young sportsmen and competitive sporting activity has been shown to more than double the risk of SCD in this age group (<35 years).3

More sportsmen have suffered sudden death than sportswomen, but the incidence has been observed to be increasing among female athletes as well.1,2


Aetiopathogenesis
More than half the cases of sudden death among sportspeople are cardiovascular in origin and among athletes aged <35 years, hypertrophic cardiomyopathy contributes to more than one third of these.2

The presence of anomalous coronary arteries is the next most frequent cardiac cause (17%).2

Basketball is most often associated with SCD in the US, whereas in the rest of the world, soccer-related SCDs are more common.1

Among athletes >35 years (who are frequently long-distance runners), coronary artery disease is the most frequent cause of SCD.4

Although competitive sporting activity confers a relative risk of SCD of 2.8 on athletes in comparison with non-athletes, it is the under­lying cardio­vascular disease that predisposes to SCD, rather than the sporting activity itself.1

Screening
There is significant variation between guidelines published in the US and Europe on pre-participation screening among sportspeople.

In the UK, pre-participation screening of competitive sportspeople is not mandatory.5 The American consensus document from the 36th Bethesda Conference and AHA guidelines4,6 recommend a 12-point screening programme, including taking a detailed history (personal and family) and physical examination including BP measurement and cardiac auscultation.
The occurrence of SCD among US athletes who have been prescreened indicates that the sensitivity of this strategy is likely to be low.7,8

European Society of Cardiology guidelines, in contrast, mandate the use of 12-lead ECG in addition to the above.9 The ECG-based screening strategy has been in use in Italy for nearly three decades.

Opinions regarding the effectiveness of this screening strategy are divided, however. Although some suggest a 90% reduction in SCD among athletes owing to the ECG-based strategy and, in particular, improved sensitivity in detecting hypertrophic cardiomyopathy,3,10,11 others have not found improved efficacy.12,13

Screening sensitivity is doubled (90.9%) when ECG is added, compared with history and physical examination alone (45.5% sensitivity), at the cost of increasing false positives (16.9 versus 5.5% respectively).14

International sporting bodies such as UEFA and the International Olympic Committee recommend the use of 12-lead ECG in screening.10

Part of the reason for the controversy regarding ECG use in screening is due to the similarities between ECG changes caused by athletic training (leading to diagnosis of false positives) and those due to inherited cardiac conditions. However, more recently, there has been a better understanding of this distinction.15

Another thorny issue has been the cost burden of ECG-based screening and whether this has to be borne by the athlete, government healthcare agencies or the clubs that employ professional sportspeople. Studies have demonstrated that incorporation of an ECG-based screening strategy is actually cost-effective.16,17

However, GPs, the first point of contact, can play an important part in the early referral of athletes planning a career in competitive sports who show red flag signs (based on guidelines) in their personal history, family history or physical examination (see box).4