FGM is almost always carried out on children and is recognised as a violation of the human rights of girls and women. There are no health benefits from FGM.

Although it is primarily performed in Africa, Asia and the Middle East, migration of communities that practise FGM to the UK means that GPs will increasingly see adult women with health consequences of FGM and young girls who may be at risk of FGM.

New NHS requirements for recording and reporting FGM within acute trusts and in general practice are being implemented.

UNICEF estimates that worldwide, more than 125m women and girls are living with FGM.1 Most are located in 29 African countries, although some specific areas of other countries, such as Yemen, Iraqi Kurdistan, Indonesia and Malaysia, have a high prevalence of FGM.1

UK estimates based on the most recent census data suggest that in 2011, approximately 137,000 women and girls in England and Wales had undergone FGM and came from countries where it is traditionally practised.2

The main risk factor for FGM is to be female and born to a mother who has had FGM. In addition, if a child or young woman is found to have FGM, younger girls, such as siblings in the family, will also be at risk.

Immediate risks are bleeding and infection, including wound infection, septicaemia, gangrene and tetanus. Deaths from FGM have been reported.

Pregnant women with FGM have increased risks of prolonged labour, postpartum haemorrhage, perineal trauma and caesarean section. FGM is thought to lead to an extra one or two perinatal deaths per 100 deliveries. 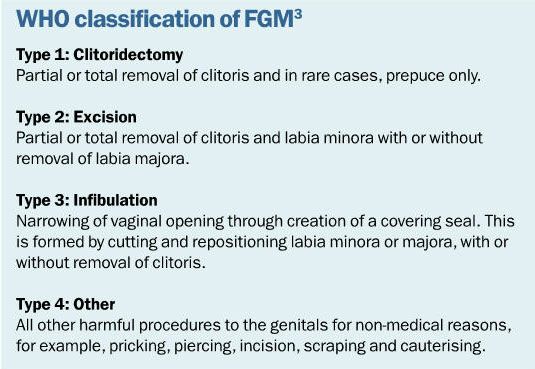 Situation in the UK

It has been illegal to perform FGM in the UK since 1985. In 2003, the law was extended to make it against the law to take a girl out of the UK for FGM. Although reports suggest FGM is currently available in the UK, to date there have been no successful prosecutions in this country.

There are two aspects of FGM management - provision of sensitive and appropriate services to women who have undergone FGM and identification and safeguarding of girls who are at risk of FGM. Both require identification of FGM.

How to ask
Sensitive and non-judgmental language should be used. The term mutilation may not be understood and many women still use the term 'circumcision'. Other phrases, such as 'Have you been cut?' or 'Have you been closed?' are useful.

Who to ask
Some African countries, such as Somalia and Sudan, are recognised to have a high prevalence of FGM, but they are not the only countries with high rates. For example, more than 90% of women from Egypt will have FGM.1

It is impossible to select exactly who to ask. All pregnant women should be asked about FGM, regardless of their country of birth and ethnic origin.

When to ask
GPs have a key role in identifying girls and women who have had, or are at risk of, FGM. Opportunities for asking about FGM arise at antenatal booking, sexual health screening, cervical smears, new patient registration and vaccination clinics.

Symptoms that should prompt enquiry among younger girls are sudden onset of genital and/or urinary tract infections.

What to do next
If there is any concern that a child is at immediate risk of FGM or has had FGM, a referral must be made to social services or the police.

The situation is less clear with adult women found to have FGM, and guidance is awaited.

If a pregnant woman is found to have FGM, she will need referral to specialist FGM services to assess whether intervention, such as deinfibulation (a procedure to open the lower vagina) is required before delivery. These services will also assess whether there is a potential risk to her unborn child if female.

There has been some suggestion that all pregnant women should be referred to social services, but this is not currently required. At present, careful judgment by the clinician is sufficient, but it is possible this situation will change.

Accurate data about the number of women and girls affected by FGM are needed to plan services. It is hoped this will lead to a better understanding of FGM patterns in the UK and contribute to its prevention.

Data collection has been hampered in the past by lack of specific codes for a history of FGM and for deinfibulation. However, from April 2014, the UK Terminology Centre has developed specific codes for FGM. There are now designated FGM codes in Read V2, CTV3 and SNOMED.

In addition, the new version of the OPCS classification of interventions and procedures includes codes for deinfibulation.

The recent attention to FGM in health services and the media may mean women will be more likely to present to their GP with health problems related to FGM.

In addition, GPs are likely to have a central role in the detection of FGM and protection of girls who are at risk. More intensive recording of data has already started.

While it is clear that girls who have had, or are at risk of, FGM require referral to social services, the guidance about reporting adult women to social services is unclear. This may change and GPs need to look out for new guidance.