You've run ultra-marathons in some pretty unusual places. Can you tell us about this?

An ultra-marathon is any distance longer than a standard marathon - it is usually 50km or more.

I've run races in Outer Mongolia and I won the North Pole marathon this year. Last year I ran 2,650 miles from John O'Groats to the Sahara, an average of 34.5 miles a day.

I did that to raise awareness of the benefit of physical activity to health, and to raise money for the Scottish charity the Yamaa Trust, which I'd worked with in Mongolia. 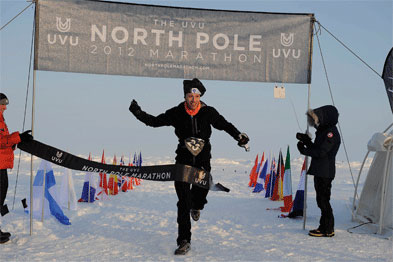 How did you get started in running?

A friend on a football pitch told me I wasn't fit enough, so I took it upon myself to get fitter. How did this turn into me running in all these ridiculous locations? I was in Nepal, jogging along one of the trails, when I passed a group of runners who were taking part in the Everest marathon. They asked if I was doing the marathon. I hadn't signed up for it, but I thought it looked like good fun.

I grew up in Kenya, so I suppose you might expect me to be a natural runner, but I'm not at all. I did play a lot of sport growing up, though. Through doing a fair bit of training, and a wee bit of dedication, I'm getting a bit quicker. 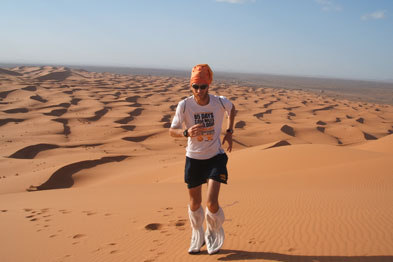 Dr Murray running in the Sahara.

Can you tell us about your latest undertaking?

First, I'm going out to Antarctica to work at the Ice Marathon. I'm going to compete in the race (in late November), but I'm also going to be taking care of the other competitors alongside the other doctors.

I'll run 50km in Antarctica on 23 November and from there I go to Patagonia the next day.

On Sunday it's Atlanta, in North America; on Monday I'm in London, on Tuesday at the pyramids in Egypt, on Wednesday in the desert in Dubai and, on the final day, in Sydney.

What sort of training have you been doing for this?

I'm not a natural runner so I have to work really, really hard at it.

It's about getting yourself into a condition where you can physically do that.

This latest run will be about 225 miles a week, but I will also be combating jet lag.

Running in Antarctica through snow is a good deal more difficult than running on a pavement, as running on sand in Dubai will also be.

It's about getting everything lined up so I know I can deal with all of that.

You are also a physical activity champion for the Scottish government. What does this involve?

I work to promote physical activity. One of the best presents we can give patients is to get them physically active.

Asking patients how much physical activity they do and for how long, and offering brief advice, is highly cost-effective. If we want to do the best for every patient, every time, this is something we should build into general practice.

In Scotland we've got a plan for physical activity that cuts across all directorates. It's about making sure it's part of what we do in the NHS, education, transport, communications, recreation and sport.

Scotland's chief medical officer, Sir Harry Burns, recognises this as a priority for 2013. He's clear you can increase life expectancy, decrease health inequality and save cash in general practice.

About £60m a year in prescription costs in Scotland alone could be saved by getting patients more active. Two appointments per GP per day are directly due to physical inactivity.

Why did you become a GP?

Part of why I went into general practice is that there are so many inspirational GPs out there. These included my trainers while I was a student. I work for the Scottish government for most of the time now, but I also do out-of-hours work in Edinburgh and the Borders.

General practice is a really fantastic profession. It offers so many different options: you can be a GP, but you can also have special interests.

I've worked on seven continents and at the North Pole. You're doing the best for that patient wherever you are and whatever their ambitions. But doing things like this brings home the opportunities that are available with a general practice qualification.