More than two out of three GPs say their practice will struggle to cope this winter, amid warnings that seasonal pressure on top of what the BMA has called a 'year-round NHS crisis' will put patients at risk.

Practices warn that they are already at breaking point and in no position to absorb the normal seasonal rise in workload, let alone cope with a major flu outbreak - which has been widely predicted - or other surge in illness.

A total of 68% of 633 GPs who took part in the GPonline poll said that their practice would struggle to cope this winter, while 90% said the NHS as a whole would struggle.

The findings reveal the depth of concern in primary care as winter begins, after repeated warnings from NHS leaders that the health service will face one of its toughest winters.

Read more
> Tips to help practices cope with winter pressure
> What GPs are saying about the winter crisis
> How can GPs access the winter indemnity scheme?
> Can GPs help the UK avoid a flu crisis?

Many GPs reported that their practice had taken steps to ease winter pressure - taking on more staff, driving up flu vaccination rates or reducing pre-booked appointments in favour of more same-day or urgent appointments.

But GPs responding to the poll made bleak predictions about the impact of winter. One warned that 'patients will die unnecessarily', while another said: 'One flu epidemic and my out-of-hours service will be in meltdown. It literally will be survival of the fittest.'

Results of the poll come just days after GP leaders criticised the government's 2017 budget announcement for ignoring general practice. Chancellor Philip Hammond announced a £335m package of funding to be released immediately to help trusts cope with winter pressure, but none of the money was earmarked for primary care.

Responding to GPonline's findings, GPC chair Dr Richard Vautrey said he was not surprised to hear that practices were extremely worried about their abiliity to cope this winter.

'Everyone recognises that the NHS is under huge pressure for the whole of the year and has no extra capacity,' he said. 'If we do see an increase in winter illness and particularly if there is a flu outbreak as forecast, then we have no extra headroom to cope with that demand.'

Last winter, by mid-January one in four hospitals were on high-level alert status - with some unable to deliver comprehensive care, and others facing major pressure that was 'compromising patient flow'.

Dr Vautrey warned that if patients had to wait longer for routine appointments, practices would face increased pressure and greater risk of staff burnout as those patients returned to their practice for additional appointments. 'It means more people to fit in to extra appointments that don't exist - putting more pressure on individuals and practices as a whole,' he warned. 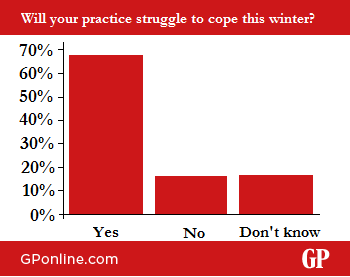 If practices struggled to cope, there was a risk that patients would 'look elsewhere' - putting pressure on out-of-hours or urgent care services, or that they would not seek prompt advice when they needed it, Dr Vautrey added. If practices were unable to see patients early and prevent illness, more could end up in hospital, compounding existing winter pressure.

CCGs 'with any sense' would realise that a share of the £335m winter pressures funding announced by the government must go to primary care, Dr Vautrey said. 'They need to use the funding where they will get the best value - and that is likely to be in community services.'

Without extra funding it was difficult for practices to take steps to ease winter pressure, he said - although practices could try to ensure their staff were immunised against flu, and offered as much support as possible to protect them from burnout.

GPonline reported last month on a sharp rise in uptake of flu vaccination among primary care staff this year.

If a flu outbreak occurred over Christmas, the Derbyshire GP warned, local health services would struggle. After a decade of falling pay, GPs were less inclined to sign up for out-of-hours shifts, Dr Holden added.

Hospitals routinely discharged patients too early and expected general practice to manage them at home, he said. 'That is routine, but as winter grinds on it gets worse,' he said. 'We are encouraging practices to push back against workload being dumped on them by hospitals, by sending standard GPC letters. GPs can't be expected to go round visiting extra patients at home and keep their fingers in the dyke to keep general practice from drowning.'

One GP responding to the poll warned that NHS services were already struggling and that winter would simply overwhelm them. She said: 'The ambulance service cannot cope (40min-plus wait for teen stab victim last year), there are no beds available in the hospitals and overnight I singlehandedly cover half a county (approx 500,000 people).

'The public will have to sleep, take paracetamol and pray. There is no way we will cope. We were working at capacity during August, never mind January.'