Three in five GP practices have had to rely more heavily on locums to continue providing services during the past year, a GPonline poll suggests.

Almost a quarter (23%) of practices needed locums to fill at least a fifth of GP sessions over the last year, according to the poll of 370 partners and salaried GPs.

A further quarter said that between 10% and 20% of GP sessions were covered by locums, while roughly half indicated that locums filled less than 10% of sessions or none at all.

The results reveal a marked rise compared to a similar poll conducted by GPonline last year, when just 14% said over a fifth of sessions were conducted by locums.

Some 6% of GPs said more than 40% of sessions in their practice were being covered by locums – with one respondent in this bracket warning their practice was ‘in the process of collapse’. 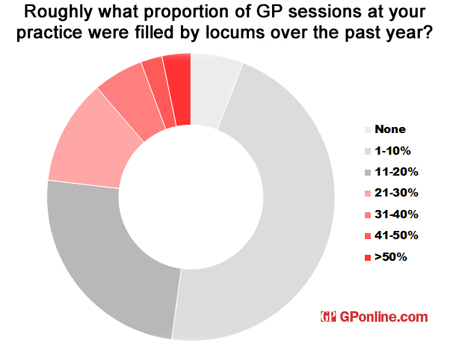 GPC sessional committee chair Dr Zoe Norris warned earlier this month that many vulnerable practices would collapse overnight if doctors were forced out of locum roles.

And many respondents said workforce shortages and impossible-to-fill vacancies were the cause for the rise in locum use in their practice.

‘We lost a partner,’ one GP said. ‘He moved to Australia as he had had enough of general practice. We really struggled to recruit after he left.’

Another said they had taken on locums after struggling to deal with an influx of patients following the closure of a neighbouring practice.

Some 59% of GPs said the proportion of sessions filled by locums in their practice has increased over the past year, while 28% said it had remained the same. Just 13% said they had used fewer locums compared with the year before – but many of these said this had come with other concessions as they were forced to take tighter control of their finances.

‘No locums so no holidays,’ one respondent GP said. Several other practices said they were now covering locums internally – paying themselves a fraction of the going rate in a bid to keep afloat.

‘We have had to fill gaps and take on extra workload across all of us, with more admin and paperwork – and all seeing an extra three patients in our clinics a day,’ said one GP.

Although less expensive overall, this method was having impacts elsewhere. This decision had made ‘home commitments such as childcare difficult’, said one GP.

GPC deputy chairman Dr Richard Vautrey said: ‘This is yet another sign of the serious workforce crisis impacting practices across the country, with increasing numbers of practices unable to recruit GPs when others leave the practice.

‘Practices will do all they can to maintain patient services and are clearly needing the help of more locum GPs to do this. It also demonstrates how fundamentally important GP locums are and it is why NHS England and CCGs should do more to engage with locum GPs and enable them to take part in local education and training opportunities.'