Significant changes to the GP workforce have taken place since the 2015 general election - GPonline looks at three key charts that reflect the upheaval facing the profession.

Overall GP numbers remain in freefall despite health secretary Jeremy Hunt's insistence that he remains committed to increasing the GP workforce by 5,000 by 2020/21 - a pledge set out ahead of the 2015 general election. 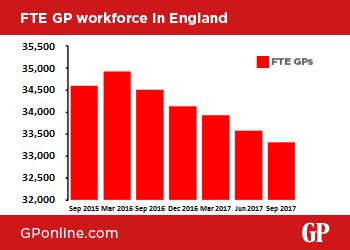 Instead of increasing GP numbers, the government has seen the full-time equivalent GP workforce drop by almost 1,300 over the past two years.

Mr Hunt has admitted failing adequately to prioritise the GP workforce in the first four of his five years and counting as health secretary. Increased medical school places, an overseas recruitment programme, rises in GP contract funding over the past two years and the offer of a state-backed GP indemnity deal are the key planks of DH strategy to reverse the trend, but ministers have left it late.

The DDRB warned earlier this year that it was unclear how GP services could be maintained in the face of the workforce crisis, and the government has been accused by MPs of complacency.

As the overall GP workforce declines, there has been a steady rise in the number of GPs aged over 55. In September 2017, 7,789 GPs across England were aged over 55 - 19% of the total workforce. The number of GPs in this category has grown by more than 1,000 in just two years. 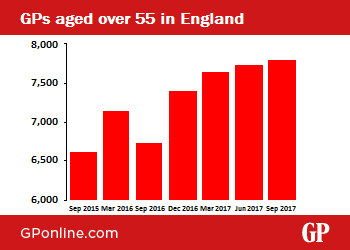 In September 2015, 6,628 (16%) of GPs were over 55%. The average age for GP retirement is 59 - demonstrating the extent to which general practice faces the 'retirement timebomb' that GP leaders have been warning about for years. Although many GPs who retire return to the workforce, it is clear that the profession is leaning far too heavily on older doctors.

Another huge shift in the GP workforce involves the rapid decline in numbers of GP partners. Almost 2,000 partners were lost between September 2015 and September 2017, with the total number in England falling from 24,826 to 22,919. 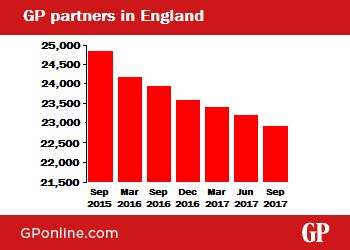 The above figure is a 'headcount' number, but translating the loss of partners into 'full-time equivalent' (FTE) terms shows the extent to which this cohort contribute to the workforce as a whole. As an FTE figure, the number of partners lost is 1,703.

As with retiring doctors, the loss of partners does not mean these GPs are necessarily lost to the workforce as a whole. But the GPC is convinced that the rapid decline in GPs in partnership roles is extremely worrying for the health service, because primary care leadership delivered through the independent contractor model underpins the NHS as a whole.

GPonline has reported on the hundreds of practice closures and mergers that have taken place since NHS England became operational in April 2013 - click here to see a map - as the health service shifts to new models of care, and partners increasingly race to avoid being left as the 'last person standing' in their practice.