More than 18,000 people have signed a petition calling on health secretary Jeremy Hunt to rule out limiting visits to GP practices, after the idea was floated by a Conservative party policy forum.

The DH has refused to comment on the proposal being consulted on by the Conservative Policy Forum, which helps party members shape Tory policies.

A consultation published by the forum asks members if they agree or disagree with the statement: ‘There should be no annual limit to the number of appointments patients can book to see their GP’. The consultation is due to close on 30 June.

The petition, which was launched by campaign group 38 degrees and has 18,0810 signatures so far, asks the health secretary to confirm that he will ‘never limit access to GPs, and that our NHS will remain free and universal without any restrictions’. 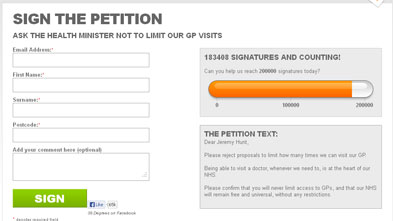 A spokesman for the group said: ‘At the moment it's just a proposal. But if the Conservatives don't see a big public backlash, it could soon be a grim reality.’

GPC deputy chairman Dr Richard Vautrey called the idea of a cap on GP access ‘bizarre’, and said it would impact on the sickest and most vulnerable patients. ‘It demonstrates a complete lack of understanding of general practice. It would be better to focus on reducing unhelpful targets that drive up use of health services,’ he said.

The Conservative Party Forum consultation said: ‘Some GP surgeries are stretched due to an expanding older population. The estimated number of consultations for a typical practice in England rose from 21,100 in 1995 to 34,200 in 2008. In 2008, the highest overall consultation rate occurred in the age band 85 to 89 years for both sexes, at approximately 13 consultations per year.

'This is in comparison to 5.5 consultations per year for the average patient. GPs surgeries must find ways to expand or change the way their service is delivered in order to meet demand.’

A Conservative Party spokesman said that limiting access to GP practices was not party policy but refused to rule it out becoming so in the future.

He said: ‘This was simply a topic to provoke discussion and isn't Conservative party policy.’

Viewpoint: GPs will be there for patients this winter, but at what cost?

Rising to new challenges is in GPs' DNA and the profession has not let patients down...

The red flag symptoms that indicate potentially serious causes of diarrhoea in adults.

GPs to be told 'shortly' how they can reclaim PPE costs

Information on how practices will be reimbursed for PPE costs incurred during the...

GP leaders have accused the government of 'behaving as if the second wave is an unexpected...