As a BMA poll reveals crumbling GP premises, Neil Roberts reports on how the profession could address the problem.

Four in 10 practices in England are inadequate for patient care, according to a BMA survey published as top-level talks on primary care premises began earlier this month.

Almost 70% of GPs said their facilities were too small to deliver additional services, and more than half have had no premises investment or refurbishment for a decade.

GPC leaders highlighted the case of Northamptonshire GP Dr Gareth Williams, who described how his patients were being let down because his practice - housed partly in a Portakabin - could not provide the services they require.

Despite the scale of the problems, senior GPs believe that of all the issues tied up in the GP crisis, premises may present one of the best opportunities for improvement. 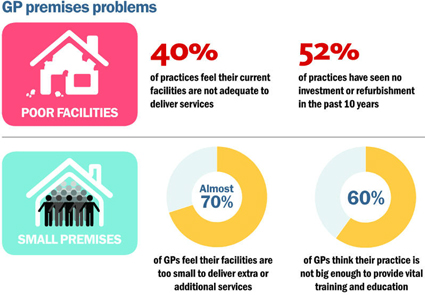 A premises summit this month brought together GPC negotiators, ministers, bankers and other industry figures. Ahead of the meeting, the GPC was keen to point out how the freeze in premises development undermines the government's policy priorities to shift more care out of hospitals and into the community.

As the BMA survey shows, many practices have no space for more work, let alone integration with community providers. At its heart, the GP premises crisis is a question of funding.

Nathan East, a primary care property specialist at law firm DAC Beachcroft, says there must be a clear commitment from the centre to provide the funding required, if the vision of shifting more care into the community is to be realised.

GPC premises lead Dr Peter Holden points to another concern emerging from current government policy - an issue discussed at the premises summit. The 'fetish' for any qualified provider (AQP) in primary care provision, he says, will drive up the costs of premises development.

'If you are going to change provider every five years, the risk of you building things has to be offset over five years. Not only does that cost more, but the banks are less willing to lend at a reasonable rate for a short-term contract. AQP is a very expensive option,' he says.

Experts believe there could be hundreds of premises development applications currently in the backlog awaiting NHS England approval, following an effective freeze on developments.

While approvals and funding from area teams seem to have started coming through in the past few months, the situation is thought to be patchy across the country.

Currently only applications that had already been approved by PCTs are being passed. Area teams are awaiting a single operating model, set to be rolled out by NHS England, to help them prioritise applications and funding based on local needs.

NHS England head of primary care commissioning Dr David Geddes says the principles of best practice to 'help area teams to align premises cases to the emerging local primary care strategy' are about to be published. On top of delays caused by the transition from PCTs to area teams, NHS Property Services is undertaking an audit of its portfolio and developing new standardised leasing terms.

But, says Mr East, 'the problem is created as much as anything else by the fact there has been a threeto four-year hiatus in any meaningful capital projects.

'Part of the problem is that, while the capital is available, it hasn't been spent because the revenue required to pay rent reimbursements hasn't been there.'

Ahead of the roundtable talks, GPC chairman Dr Chaand Nagpaul told GP he would push for investment within the next year. 'Our view is, there is a need for some immediate investment, much of it at a small scale, enabling practices to expand, provide an extra room,' he said.

John Hearle, joint chairman of the Primary Care Premises Forum, representing a range of private sector interests, says one of the main problems is the 'substantial lack of funding - it would be more accurate to say, the lack of annual funding - for primary care premises'.

He adds: 'It is known that the NHS still has large sums of capital locked up - for example, excess hospital holdings held by foundation trusts - and the NHS needs to bring all elements together so monies can be properly redistributed.'

So while the new NHS bodies work on bringing their procedures up to scratch, the tough work will be to secure funding.

'Greater funding is needed to unblock this,' says Mr East. 'Whether or not that will be unlocked before the election is difficult to tell.'

This is where GPC lobbying comes in. Despite the unexplained absence of NHS England from proceedings, the GPC's roundtable talks with officials from across the sector seem to have gone well, with broad agreement on the shape of the problem.

The GPC is now pushing for a multi-agency 'task and finish' group to begin drawing up policy proposals to put to government.

There was recognition, says Dr Holden - outlining issues raised in the talks - of the disparity between primary and secondary care, which receives 30% built into funding for premises and infrastructure.

Officials and industry representatives also heard that independent sector treatment centres (ISTCs) built next to hospitals are given surrender clauses in their contracts to guarantee their liabilities should the service be ceased.

'What is sauce for the goose is sauce for the gander,' says Dr Holden. 'It had to do that because the ISTC providers said: "You want us to invest, well if the government comes in and changes the law, or changes policy, we're going to be left holding the baby.". If ISTC providers can have this, GPs want it too. Why should we have what we've got at the moment? We're taking all the risks and getting no rewards.'

One possible source of new funding is section 106 of the Town and Country Planning Act 1990 - funding secured by local authorities from developers to fund local services as part of planning agreements.

'It can work,' says DAC Beachcroft's healthcare estate specialist Edwina Farrell. 'It is possible, but I think the option is being bandied about without drilling down into the detail.'

Ms Farrell warns that practices would have to make sure they are in at the beginning of the process, to ensure their particular facility receives the funding, rather than the money being allocated for generic healthcare infrastructure.

'You need to make sure you tie it down very carefully at an early stage,' she says. 'It can work. If you are the GP practice, you need something documented, some contractual rights, to make sure the funding comes to you.'

Mr East predicts a move towards an evolution of former Labour health minister Lord Darzi's polyclinic idea. With NHS England and CCGs working more closely together commissioning services in future, he says, there is the opportunity 'to make sure all services being commissioned are joined up, and premises solutions are joined up at the same time'.

In the short term, however, the GPC has promised further talks with government in the coming months.