An alarming number of doctors experience mental health and wellbeing problems, yet most are unlikely to seek help for fear of discrimination from colleagues. Professor Roger Jones explains why the Royal Medical Benevolent Fund is aiming to raise awareness of this issue.

A survey released this month by the Royal Medical Benevolent Fund (RMBF) has revealed an alarming number of doctors experiencing mental health and wellbeing problems, such as depression and anxiety. Yet despite their obvious need for support and advice, the doctors surveyed also said they are unlikely to seek help for fear of discrimination or stigma from colleagues (84%).

We conducted our survey amongst hospital doctors, consultants, GPs, and charity supporters as part of our new campaign ‘What’s Up Doc?’. The campaign aims to highlight the importance of supporting doctors throughout the UK who are working under increasing scrutiny, difficulty and pressure.

The Royal Medical Benevolent Fund has been helping doctors, medical students and their families in times of crisis for 180 years. The charity provides financial support, money advice and information when it is most needed due to age, ill health, disability or bereavement.

Survey respondents were also asked to identify the key factors contributing to the growing pressures on doctors today. We found that:

Click on the image below for more survey findings. 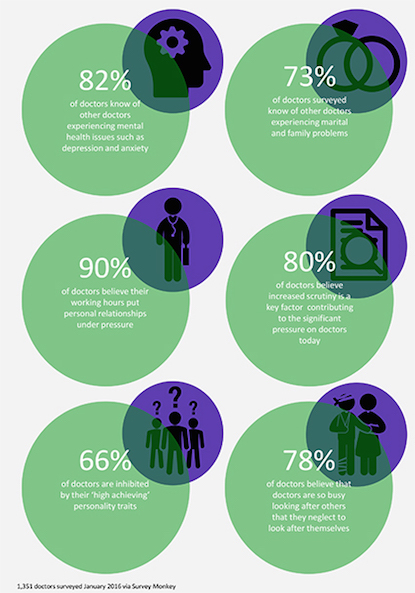 As part of our activity we are working with Oxford GP Dr Richard Stevens, coach at Thames Valley Health Education England to develop a free downloadable online guide, ‘The Vital Signs’, which highlights key trigger points and warning signs for doctors coping with heavy workloads, stress and potential burnout.

The guide also signposts organisations and support networks for those in need. Worryingly, 66% of those interviewed felt that the NHS provided a poor level of support to doctors and their families.

Every year, via our network of over 250 volunteers, the RMBF helps hundreds of doctors, medical students and their families who are struggling due to financial concerns or ill-health – all in complete confidence. I feel privileged to be a part of this team. However, in reality we know that this is just the tip of the iceberg, and there are many more doctors who feel too ashamed or embarrassed to come forward – or perhaps they are as yet unfamiliar with the work of the charity?

We want to change this, and hope that by raising awareness of these issues and openly discussing them, we will go some way towards breaking down the barriers of stigma and shame. I would urge any doctor in difficulty to contact us, because no one should feel too proud to ask for help or have to suffer in silence.

If you or someone you know is in need of support, visit www.rmbf.org or call 020 8545 9194 for more information. Help spread the word and support our campaign by following us on Twitter @TheRMBF, and use the campaign hashtag #WhatsUpDoc.

Dr Cathy Wield was working in accident and emergency when she first became ill with depression. This was long lasting and severe, but she eventually managed to return to work and progressed to become a Registrar in the same speciality. Unfortunately, she then went on to suffer a second episode of severe depression following which she was advised to retire from her medical career.

Due to Cathy’s prolonged unemployment and her husband’s low income, the couple found themselves having to spend their savings. Yet after six years of not working in medicine, Cathy’s health had improved so much that she felt ready to return to work. Returning to the challenging A&E environment meant that Cathy would need to complete various training courses as preparation.

She had previously heard about the RMBF, and in 2012 she approached the charity to see if they could give her financial assistance for ‘back to work’ costs. The RMBF provided Cathy with funding for an Advance Paediatric Life Support Course, something she would not have been able to afford without their help. Cathy was also able to purchase the new equipment she needed to make a return to A&E.

In 2013 Cathy resumed working and is now once again an accident and emergency registrar. She has also published two books about her journey through depression.