Under the effects of changed hormonal and immunological profiles, and haemodynamics, pregnant women present with three types of skin changes – physiological, altered existing disorders and dermatoses specific to pregnancy.

Melasma
Melasma (chloasma) is a distressing hyperpigmentation on the face in a ‘mask’ distribution. Sometimes other parts of the body exposed to UV light are affected. In pregnancy it probably occurs because of the rise in melanocyte-stimulating hormone, estrogens and progesterone. Genetic predisposition, medications, cosmetics and UV exposure are other factors.

Melasma may fade postpartum, but often persists for months and years, and may flare up with hormonal contraceptive use.

Management in pregnancy and breastfeeding involves sunscreens and UV avoidance for the face. Broad-spectrum sunscreens should be used in any weather and reapplied every two to three hours, starting from the second trimester.

Striae gravidarum
Striae gravidarum occur in most pregnant women by the third trimester. They tend to fade weeks or months after delivery. Simple emollients and weight control may help, although there is no effective preventive treatment.2 Topical retinoids and lasers can be beneficial after pregnancy and breastfeeding.

Other common changes
Palmar erythema and telangiectasia are common physiological changes in pregnancy. There is an increased incidence of spider angiomas, which usually disappear a few months postpartum.3

Pressure from the growing uterus on the large blood vessels and increased blood volume can cause the development of varicose veins. Support hosiery and walking can help.

Splitting and roughness of the nails are not uncommon in pregnancy. The reasons are still unexplained, although low iron levels could be responsible. During pregnancy, the increased need for iron often exceeds a woman’s dietary intake.

This also affects hair growth and quality. More hair goes into the resting phase that gives an impression of thicker hair. About three months after childbirth, women generally experience shedding of the hair. Some women develop mild hirsutism, which generally settles after pregnancy and breastfeeding.

There is an increase in the numbers of epithelial polyps (skin tags) and naevi, owing to the high levels of estrogen. Naevi may change colour (mostly becoming darker) and increase in size.

Acne and perioral dermatitis in pregnancy are also common, influenced by the high levels of estrogen. Acne tends to worsen in early pregnancy, but improves later. Mild cleansers, topical erythromycin, benzoyl peroxide and azelaic acid are safe to use. In severe cases, oral erythromycin can be prescribed, but ideally not in the first trimester. UV treatment is also a safe option.

Increased activity of sebaceous glands and increased blood flow are responsible for ‘pregnancy glow’ and the enlargement of Montgomery tubercles. The areolar tubercle has two components, a sebaceous gland and a mammary duct arising from deeper breast parenchyma, and may become inflamed during lactation.4

Pruritus is quite common in pregnancy, often owing to the skin becoming drier, and may be relieved by regular use of emollients. Other causes of pruritus in pregnancy are haemorrhoids (perianal pruritus), hyper- or hypothyroidism and iron-deficiency anaemia.

Raised levels of hCG (peaks between ninth and 12th week then declines, remaining higher than in non-pregnant women), progesterone, estradiol, estrone, testosterone, prolactin and osteoprotegerin in pregnancy affect the Th1/Th2 balance, shifting it towards Th2.5,6 This is why, in most cases, psoriasis improves during pregnancy (may stay the same or worsen), but eczema and other Th2-influenced disorders flare up.6

Intrahepatic cholestasis
ICP is not a dermatosis, but an intense pruritus with secondary excoriations and sometimes jaundice, caused by hormone-induced reversible cholestasis. The exact pathogenesis of ICP is still unknown, but hormonal changes, genetic predisposition and obesity, and exogenous factors, such as seasonal variability and diet, are considered important.

Pruritus starts on the palms of the hands and soles of the feet, but can occur anywhere on the body, and is typically worse at night. It is often severe and later becomes generalised, accompanied by elevated serum bile acid levels and aminotransferases, sometimes dark urine and pale stools.

ICP presents in the third trimester, but more often in the fourth quarter of pregnancy. It poses a high risk to the fetus, causing meconium staining of the amniotic fluid, stillbirth in severe cases (associated with high bile acid levels and an early onset), premature birth and intrapartal fetal distress.

There is also a high risk of haemorrhage in mother and child, because ICP can cause vitamin K deficiency. ICP often recurs in subsequent pregnancies.3

Treatment is directed to reducing the levels of serum bile acid and pruritus. Ursodeoxycholic acid 15mg/kg per day or in two divided doses is considered to be most effective in reducing pruritus and giving a safer outcome of pregnancy. It is not licensed in the UK for use in pregnancy and lactation, so obtaining specific patient consent for treatment is important.3

UVB is helpful in some cases, but pruritus normally resolves within the first two weeks postpartum. 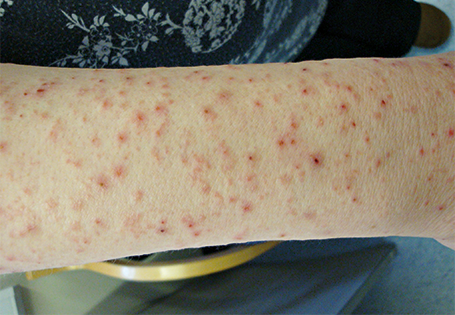 Atopic eruption of pregnancy is the most common dermatosis

The latest classification includes dermatoses previously described as eczema of pregnancy, pruritic folliculitis of pregnancy and prurigo of pregnancy, explaining the polymorphism of skin lesions seen in this condition.7

Women with a personal and/or family history of atopy are most at risk and account for 20% of cases of AEP. In 80% of women, AEP presents as a primary complaint, but tends to flare up in subsequent pregnancies. This is due to the predominance of humoral immunity and the shift towards Th2 response under the influence of the changed hormonal status in pregnancy.

AEP poses no danger to the mother and fetus, although there is a higher risk of developing atopic disease in future for both.

Treatment is with frequent daily applications of emollients, 1% menthol cream, calamine cream or mild to moderate potency topical steroids, with potent topical steroids being saved for more severe disease.3 Topical steroids are considered safer than oral, although if necessary, oral prednisolone can be prescribed.

Narrow-band UVB is helpful, but caution should be exercised because of the higher incidence of photosensitivity in pregnancy.8 Antihistamines are not licensed for use in pregnancy, but chlorpheniramine and cetirizine are considered safe. Ideally, oral medications should be avoided in the first trimester.

Skin lesions in the form of erythematous, intensely pruritic papules, coalescing into plaques and wheals, appear in the striae gravidarum of the abdomen, spearing the umbilicus, a pathognomonic sign of PEP.

The eruption spreads to the trunk, arms and legs, never to the face, with the hands and feet unaffected in most cases. Diagnosis is based on clinical presentation, although in some cases, biopsy and direct and indirect immunofluorescence are required for the differential diagnosis with PG.

The third trimester of pregnancy is the most common time of onset, but postpartum cases are also reported. Spontaneous resolution occurs within four to six weeks. Overstretching of the connective tissue is thought to cause inflammation, leading to the development of PEP. Nulliparity, multiple pregnancies and a large fetus are considered risk factors.3

PEP poses no risk to the mother and fetus and does not recur in subsequent pregnancies. Emollients, antipruritic creams and antihistamines help to control this self-limiting condition.

Pemphigoid gestationis
PG, formerly known as herpes gestationis, occurs in about one in 50,000 pregnancies, mainly in the second or third trimesters, rarely in the first trimester or postpartum.7

PG has no connection with the herpes virus, hence the change of name. It is an autoimmune disorder and resembles bullous pemphigoid.

Circulating complement-fixing IgG (predominantly IgG1) antibodies against the skin basement membrane zone, demonstrated by indirect immunofluorescence and linear depositions of C3 with or without IgG along the basement membrane in perilesional skin, are diagnostic. PG is associated with a higher prevalence of other autoimmune disorders, such as autoimmune thyroiditis.3

The clinical presentation is of erythematous urticarial plaques evolving into blisters. The eruption often starts on the abdomen over the umbilicus (unlike PEP, which spares the umbilicus), spreading to the chest, back, thighs and arms, and is intensely pruritic.

Mucous membranes and face are not usually affected. PG tends to recur earlier in subsequent pregnancies, but can skip some pregnancies. A small number of newborns of affected mothers develop papules and blisters.

PG is associated with a higher risk of miscarriage, premature delivery and low birthweight. It is normally treated with oral corticosteroids. Milder forms respond to topical steroids and antihistamines. PG resolves weeks, sometimes months, after delivery and can be triggered by menses and contraceptives.

Clinically and histologically, it resembles pustular psoriasis. There is often, but not always, a family or personal history of psoriasis. The condition develops in the third trimester and resolves postpartum, but may recur in subsequent pregnancies.

Skin eruption starts in the skin folds with sterile pustules which coalesce, on a background of erythema, often associated with fever, headache, general malaise and hypocalcaemia.

Pustular psoriasis of pregnancy poses a risk of stillbirth and fetal abnormalities, and rare cases of maternal death have been reported. Early diagnosis is important for improved outcomes.

Treatment is usually with oral prednisolone 30-60mg daily at a reducing dose, or ciclosporin. Methotrexate and retinoids are contraindicated in pregnancy.9 Supportive care, with rehydration and frequent use of emollients, is important.

Recommendations
Pregnant women with skin eruptions need to be seen in secondary care. Pruritus in pregnancy is common and requires assessment. Common causes, such as scabies, infestations, drug reactions and urticaria, should be excluded.

Pregnant women with autoimmune disorders, such as lupus erythematosus and autoimmune thyroid disease, should be referred because of the risk of passive transmission of maternal antibodies to the fetus. The potential risks of any medication must be balanced against the risks to the mother and baby.