Seborrhoeic dermatitis (SD) is a classic inflammatory dermatosis - it is common and chronic, with multiple treatment options but no cure.

It causes many symptomatic and cosmetic problems, necessitating a clinical diagnosis.1

The exact aetiology of SD remains uncertain but involves a complex interaction between host factors, sebum produced by sebaceous glands and commensal malassezia yeasts. Those most associated with SD are Malassezia globosa and M restricta.2 Previously known as pityrosporum, molecular genetics has more recently confirmed them as malassezia.

SD affects otherwise healthy individuals of any ethnicity, in the areas of skin most richly expressing sebaceous glands. It is here that malassezia yeasts are most numerous because they metabolise fatty compounds found in sebum.1 SD manifests when these glands are at their most active, in early infancy and post-puberty.

Estimates of SD prevalence and incidence are hindered by many cases being mild and poor case definition, so probably underestimate the true figure. SD is noted to be especially prevalent in those with HIV/AIDS and chronic neurodegenerative disorders, such as Parkinson's disease.1

Important! SD is especially prevalent in those with HIV/AIDS and chronic neurodegenerative disorders

Infantile SD is self-limiting and can begin within a few weeks of birth; cradle cap is its most frequently noted feature.

Infantile SD initially appears on the scalp and can spread to the face, behind the ears, trunk and flexural areas of the axillae and groin. A build-up of scale and exudate form the thick crusting of cradle cap.

Adult SD develops after puberty and can be divided into seborrhoeic dandruff, classic and widespread types. Classic SD affects the scalp, brows and nasolabial folds, spreading to cheeks, central chest, behind the ears and the external auditory canal.

Seborrhoeic dandruff is SD affecting, or confined to, the scalp.

Widespread types include that involving the large flexural areas of the body (axillae, groin, sub-mammary) and rarely, erythrodermic SD.

SD may be pruritic but lack of pruritus can be a useful diagnostic clue. Examination reveals a papulosquamous eruption characterised by often well-defined erythematous patches and thin plaques covered with bran-like, greasy scales. Blepharitis is common. If neglected then greasy scales can build up to form larger plaques.

Seborrhoeic dandruff presents as widespread fine scaling of the scalp with underlying erythema and even pustules and inflammatory papules.1 It does not cause scarring alopecia but if neglected may develop into pityriasis amiantacea, where large thick adherent scales bind down clumps of hair.

If SD is widespread and/or resistant, an HIV test should be considered. Skin biopsies are rarely needed and will show non-specific features of a spongiotic dermatitis.

Important! Lack of pruritus can be a useful diagnostic clue to SD

SD remains a clinical diagnosis based on the distribution and morphology of lesions. It does not cause systemic symptoms unless it becomes erythrodermic. The differential diagnosis for SD is wide, includes many other papulosquamous eruptions and depends on the areas affected (table 1). A full examination of the integument and oral cavity is essential to pick up features of these conditions.

A useful diagnostic clue is rapid improvement with topical treatments such as ketoconazole.

Features of SD may occur in patients with psoriasis; this presentation is referred to as sebo-psoriasis.

Being so common, SD can exist alongside other dermatoses, such as acne rosacea, in which case, treatment strategies have to be developed to benefit both conditions, while not worsening either.

Infantile SD must be distinguished from atopic dermatitis, napkin dermatitis (skin folds relatively spared), candidiasis and psoriasis, which may be difficult (table 2). If severe, refractory to treatment or in the context of an unwell infant, consider rarer conditions such as acrodermatitis enteropathica (zinc deficiency) and more rarely, Langerhans cell histiocytosis (purpura and petechiae).

The aims of treatment for patients with SD are to reduce erythema, scaling and pruritus, and improve symptoms and cosmesis. 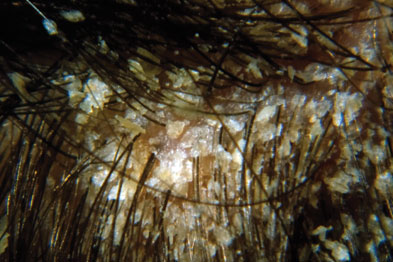 Seborrhoeic dandruff can be treated with ketoconazole

Regular emollients and soap substitutes can be tried initially for infantile SD, especially if asymptomatic.

In adults with SD, topical ketoconazole 2% cream or a mild-to-moderate potency topical steroid can be advised initially.3 A suitable regimen would involve twice-daily application to affected areas for a few weeks, weaning down with improvement, aiming to use once or twice a week to maintain remission.

Regular washing of affected areas, with or without an emollient as a soap substitute, depending on underlying irritation and greasiness of the skin, can help to prevent the build-up of scale.

For refractory or widespread SD where topical therapy is impractical, oral itraconazole 200mg daily for two to four weeks is effective.5

Important! Long-term regular application of topical steroids to facial and especially periocular skin should be avoided.

The topical calcineurin inhibitors tacrolimus and pimecrolimus are effective in treating SD.7-9 Both can be used twice daily initially and weaned down as the SD improves. Proactive treatment of adult facial SD to maintain remission with 0.1% tacrolimus ointment once or twice per week is also effective.9

Topical ketoconazole has been shown to be effective for long-term treatment, with a favourable safety profile.10 In this study, ketoconazole foam was used and no serious adverse events were reported, although 15% of participants reported treatment site related adverse events, such as pruritus, pain and irritation.

A recent study has revealed that topical ketoconazole may not act by decreasing actual malassezia numbers on affected skin but via ‘non-antifungal’ effects such as shifting host or fungal gene expression.11

Infantile SD is self-limiting, normally resolving after a few months. However, SD may improve just as atopic dermatitis is starting, often with no discernible break between the two.

Adult SD is chronic. Most patients will find benefit from one of the above mentioned treatments. However, there is no cure and if treatment stops, SD can be expected to return.

Therapy may need to be stepped up to maintain control from time to time. This is due to the natural history of this chronic relapsing dermatosis and must be explained to patients at the outset.

Patients must find a level of maintenance therapy that keeps their SD at bay.

Physicians must ensure that the chosen regimen is safe over the long term, offering patients encouragement, support and changes in therapy as and when needed.

A 29-year-old man presented with an itchy red rash on his cheeks that had been present for four months. He had been treating it with emollients, which had not helped. The rash had become progressively more itchy and spread over his cheeks.

The patient reported that this was causing cosmetic concern and was increasingly being noticed by friends and colleagues. He was otherwise well and took no regular medications.

On examination, scaly patches of erythema were seen on both cheeks, going into the nasolabial folds. Greasy scales were seen in the eyebrows. A fine scale was seen coating the scalp, and the patient said he had always had some 'dandruff'.

Fine telangiectasia and a few inflammatory papules were also noted on the face. On further questioning, the patient said he had noted a few pustules in the area in the past and often noticed facial flushing. Examination of the rest of the integument and oral mucosa was unremarkable.

A diagnosis of facial and scalp SD was made, but there was also evidence of acne rosacea. A three-month course of oral lymecycline 408mg daily was advised, with topical ketoconazole cream twice daily to affected areas on the face, aiming to wean this down to once or twice per week over the following few weeks as the rash improved.

Furthermore, daily facial washing to remove greasy scales and use of a shampoo twice a week, leaving on the scalp for five minutes before washing off, was also advised.

Topical corticosteroids were avoided because they could worsen the rosacea, which lymecycline was prescribed specifically to target. Interestingly, metronidazole gel has been found to be effective in SD and could be trialled in this case in the future if needed.12 Follow-up was arranged at three months.

This is an updated version of an article that was first published in May 2013.