GPs are using flexibilities in new GMS, allowing them to work for longer, reports Prisca Middlemiss.

General practice has long been haunted by the prospect of a 'retirement time bomb'.

Much of this concern was linked to the wave of GPs recruited from the Indian subcontinent in the 1960s, many of whom have matured to retirement age over the last decade. 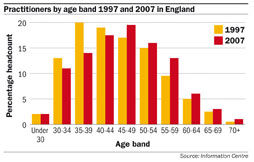 The upward trend in the average age of the GP workforce in some areas was such that in December 2002, the King's Fund issued a report claiming that a quarter of GPs in England would retire within five to 10 years.

In 2001, then GPC Wales chairman Dr Tony Calland said that the GP workforce crisis in Wales was so acute that 'in some areas general practice may cease to function'.

Doctors staying in work
But there is growing evidence that GPs are not retiring in the numbers predicted.

More than twice as many GPs are staying at work beyond 65 as 10 years ago.

Today, almost a thousand GPs are still working past pension age - making up almost 3 per cent of the workforce.

There are 225 GPs in their seventies still seeing patients and there are some over-75s still in the consulting room - two in Berkshire West PCT alone.

The predicted retirement time bomb is not happening. The belief was that parts of the country would be denuded of GPs as the workforce retired en masse.

In reality, parts of England - Barking and Dagenham, for instance - have seen admittedly small numbers of GPs working beyond retirement age increase fourfold over 10 years.

In Coventry, they have gone up from nine to 23; in Dudley from six to 19; in Salford, from one to nine; in south Birmingham, from three to eight; in Tameside & Glossop from one to seven; and in Wolverhampton, from one to 16.

Favourable conditions
Some younger GPs argue that the older generation are hanging on while their income is at unprecedented levels. A contributor on GP's website Healthcare Republic wrote recently: 'No one is willing to retire due to the fortune they are earning.'

Others suggest that GMS contract changes and the PMS contract have made it easier for GPs to return part time to their practices after retirement.

There is also evidence that GPs who take 24-hour retirement are coming back as part-timers or as locums.

He added: 'The contract became practice-based, rather than personal, so GPs could step back. Since then, more doctors have come into the arena while others have found that they can retire as performers but retain their contract as a provider.

'You can just take a back seat and deploy clinical staff. The only reason to retire is for the tax-free lump sum. That's why they haven't had to let go.'

Uncertainty created by the government's attempt to apply a retrospective pensions cap, which would have significantly cut pensions received by GPs retiring in 2006, may also have slowed the GP retirement drift.

Some GPs may have put off retiring after the DoH announced plans to cap pensions, but may now reconsider after the BMA's successful bid to overturn the move in a judicial review.

Dr Robert Morley, secretary of Birmingham LMC, said: 'GPs may be waiting until times are a bit more certain. Now that the government's action over pensions has been shown to be illegal, 2009 may be seen as a more appropriate time to retire.'

The judgment may even reactivate the time bomb, some GPs fear. Lancashire GPC member Dr Kailash Chand warned: 'The danger of the retirement time bomb is still looming. GPs who have not retired yet may well retire imminently in the next two years.'

Clearly, such stubborn spectres are not that easily exorcised.