Manoeuvrability is where the Twingo wins out, writes Dr Tony Rimmer.

As the threat to practice profits continues, this is a good time to think small with regard to practice cars.

This is particularly appropriate if you practise in a city or urban area. Thankfully, there has been a flurry of activity as manufacturers release new city cars on to the market.

The ideal recipe includes compact dimensions, versatile interiors, manoeuvrability and small, economical engines. Add to this some attractive styling features and the potential for personalisation. Finally, keep it relatively cheap - about £10,000 - and the die is cast. 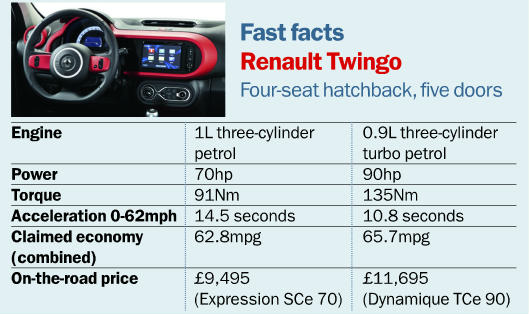 These are all good cars and each has its own features to try to stand out in this competitive market. They are all front engine and front-wheel drive, although Renault, which is joining the party with the Twingo, is daring to be different, with a rear engine, rear-wheel drive car.

Now in its third generation, the Twingo has never been a big seller in the UK, but Renault is hoping to change that with the release of this all-new model.

A radical rethink of the mechanical layout means the front wheels are free to go about their business of steering, unhindered by driveshafts. This means the Twingo's front wheels can turn to an angle of 45 degrees, which translates into the smallest turning circle of any car in this group.

Is this useful in real life? Does boot space suffer from the engine being in the rear? Does it appeal as a practice car, nipping in and out of traffic and able to park easily in the tightest of spaces when out on home visits?

I have been driving two different versions of the Twingo to see how this very different entrant into the city car market can compete in the real world.

Priced from £9,495, the Twingo is available in two engine sizes, both petrol. The 1L three-cylinder engine produces 70hp, while the turbocharged 0.9L engine produces 90hp. Their claimed fuel economy is 62.8mpg and 65.7mpg respectively.

There are three trim options - Expression, Play and Dynamique. The Expression does without air conditioning, while the top of the range Dynamique has sophisticated features, such as stop-start, lane departure warning, cruise control and leather steering wheel.

Externally, the Twingo looks great. It has a grown-up, sporty stance and the myriad optional external colour combinations and decals give it a fresh appearance.

All Twingos have five doors and this aids access to the rear seats, which have just enough room for two adults. Space in the front is generous and the coloured dashboard trim helps with the feel-good factor.

Trim materials are a bit cheap, though; just to remind you that you are not in a luxury car.

The boot is spacious enough for a car of this size, despite the engine being sited under the floor.

On the road, the handling is safe, but not as entertaining as a Mini. The rear engine thrums away at the back and the undiluted steering gives great feedback.

Power is only just adequate in the non-turbo car and if you tend to venture out of urban areas, the turbo gives you a bit more oomph, but not as much as you would expect.

Where the Twingo scores over its rivals is in manoeuvrability. The tight turning circle is truly impressive. Narrow streets and tight parking spaces are approached with great confidence, as this little car has the ability to turn and squeeze unlike anything else on the road. This is a great attribute for a city car and will appeal to many GPs.

Another useful and very up-to-date feature is the R&Go application, which turns your smartphone into a touchscreen for your dashboard.

It can then display media sources and vehicle data (fuel consumption, rev counter), and function as a 3D sat nav, using a free UK map and free downloadable apps for any Android or IOS smartphone.

The Twingo is a really important entrant to the city car market. It has some markedly different features that make it stand out, and deserves consideration.

COVID-19 vaccine payments to GP practices will rise nearly a fifth to £15 per jab...