Dengue is widespread in Brazil. Ahead of the Football World Cup 2014, Dr Mike Townend discusses the clinical features and prevention of dengue.

Dengue is a flavivirus infection transmitted by the bites of female mosquitoes, mainly of the species Aedes aegypti and Aedes albopictus, which are daytime biters. From its origins in Southeast Asia it has spread widely to many parts of the tropical and sub-tropical world . Aedes mosqitoes are capable of breeding in small quantities of water such as accumulated rainwater in oil drums, and old tyres, as a consequence of which dengue frequently occurs in urban areas.

Dengue is widespread in Brazil, which many travellers will visit this year for the Football World Cup and in 2016 for the Olympic Games. 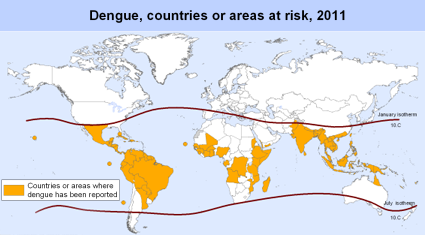 Worldwide distribution of dengue (Source: WHO)

The incubation period is usually between two and five days but may occasionally be longer. This is followed by fever, which may abate after a day or two, only to rise again. This is known as saddleback fever. Common symptoms are severe arthralgia and myalgia, giving rise to the name breakbone fever, and headache. Up to 50% of patients develop a maculopapular rash, and there may be widespread lymphadenopathy. Recovery may be accompanied by prolonged fatigue and/or depression.

Examination of the peripheral blood is likely to show leukopaenia, thrombocytopaenia and eosinophilia, and a raised level of alanine aminotransferase (ALT). Dengue virus may be isolated from the blood during the first five days and acute infection may also be diagnosed by reverse transcription polymerase chain reaction (RT-PCR). IgM antibodies may persist in the blood for two to three months, and a positive test may indicate either recent or previous dengue infection.

If a traveller has had no previous exposure to dengue a positive test is likely to be due to recent infection, but there is also cross-reactivity with other flavivruses such as West Nile, Japanese encephalitis and yellow fever, so the test is not specific. Around 2% of patients may go on to develop the severe complications of dengue haemorrhagic fever (DHF) or dengue shock syndrome (DSS).

There is no specific treatment. Symptomatic relief, avoiding the use of aspirin for analgesia because of the risk of bleeding, and maintenance of fluid intake are the mainstays of treatment.

There is currently no vaccine available for the prevention of dengue. Avoidance of mosquito bites by wearing clothing that covers as much of the skin as possible, and the use of effective insect repellents, throughout the day from dawn to dusk (in contrast to malaria prevention throughout the night from dusk to dawn) should be practised. The most effective insect repellent is still diethyltoluamide (DEET).

DHF is characterised by a high fever, haemorrhagic phenomena, hepatomegaly and circulatory failure. There may be a petechial rash, epistaxis and bleeding from the gums. A positive tourniquet test, applying a blood pressure cuff inflated to midway between the systolic and diastolic pressure for five minutes, is likely to show more that 10-20 petechiae per square inch.

This is a life-threatening condition requiring urgent specialist treatment, including rapid replacement of lost plasma volume.

There are four serotypes of dengue virus. The likely explanation of the occurrence of DHF is that it represents a hyper-immune reaction to infection with one serotype when the individual has previously been infected by a different serotype.

As most UK travellers to Brazil are unlikely to have had a previous dengue infection, the occurrence of DHF also seems unlikely, but its occurrence cannot be positively ruled out.

In the case of DSS, typical signs of circulatory failure are present such as cold, clammy skin, rapid weak or almost imperceptible pulse and a low blood pressure with a reduced pulse pressure. The risk of death at this stage is high, and immediate resuscitation to restore blood volume is essential.

Other complications of dengue

In addition to DHF and DSS, there may occasionally be a variety of neurological complications including convulsions, cerebral oedema and paresis. Liver failure and haemolytic uraemic syndrome may also occur.

Researchers have called for 'decisive action' to reverse declining continuity of...

Salaried jobs are now the most attractive career option for GPs, according to a GPonline...

GPs fear millions of pounds in primary care funding could be lost because rising...