Dr Robin Dale discusses the side-effects that might be experienced by users of anabolic steroids.

Anabolic steroids, or more accurately, anabolic-androgenic steroids (AAS), are derivatives of testosterone, which have different properties.

The anabolic effects of testosterone and AAS promote protein and collagen synthesis, and increase muscle size and bone metabolism. Androgenic effects are most evident in the adolescent male and elicit the onset of secondary male characteristics in hair pattern growth, sebaceous gland activity and maturation of sperm and libido.

AAS that are more anabolic bind more weakly to the androgen receptor, but all AAS are virilising if used for long enough at high enough doses.1

The use of AAS is not confined to bodybuilders or high-level athletes; it has spread to casual fitness enthusiasts who wish to improve their strength or appearance. AAS have limited legitimate use in the UK - their main clinical use is in the treatment of male hypogonadism.2 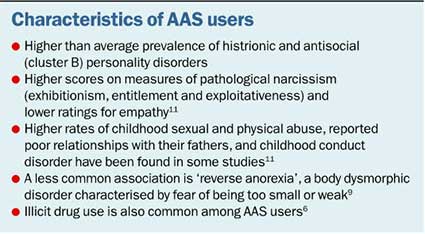 How AAS are taken

Parenteral AAS are administered in an oily suspension and released slowly into the plasma, extending their half-life, so less frequent administration is necessary.

Multiple oral and injectable compounds are generally combined (stacked) and administered during cycles lasting four to 12 weeks. The aim of stacking is to combine different characteristics and avoid overlap of the benefits and side-effects of the different AAS.

'Mass building stacks' aim to maximise muscle and strength gain. These may be followed by a 'cutting stack' to lose body fat and improve definition and then 'post-cycle therapy' using non-steroidal drugs to restart androgen production.1

Cycling is practised in the belief that 'off cycles' or steroid-free periods will reduce tolerance to the steroid and reduce the risk of side-effects from prolonged use.2

Most stacks include non-steroidal drugs. These are added to enhance anabolic effects (human growth hormone, insulin-like growth factor 1 and insulin), to enhance fat and water loss (diuretics, thyroid hormones, beta-2-adrenergic receptor agonists and amphetamines), to counteract negative side-effects of AAS (aromatase inhibitors and estrogen receptor antagonists) and to reactivate endogenous testosterone production at the end of a cycle (gonadotropins).

Athletes sometimes use erythropoietin and blood transfusions to enhance their performance in endurance events.3

In 2010, the Advisory Council on the Misuse of Drugs recommended that anabolic steroids should continue to be controlled as class C drugs under the Misuse of Drugs Act 1971, but there is no possession offence for AAS.2 Most users obtain their AAS from the illicit market.

Data regarding the adverse health effects of AAS are mainly limited to case study reports and a range of small cohort studies.

These have a number of limitations related to selection bias and interindividual differences between subjects. They also rely on individuals retrospectively reporting use of drugs of uncertain potency, often in varying combinations and combined with other illicit drugs.3

Evidence for an association between cardiovascular disease and AAS use mainly comes from case study reports. These do not prove a causal relationship, although a number of cardiovascular events/diseases have been reported in AAS users, including stroke, MI, sudden death, cardiomyopathy, heart failure, endocarditis and subdural haematoma.5

Most studies examining cardiovascular risk factors in AAS users have demonstrated a decrease in HDL and some, an increase in LDL.5 The effects on BP, left ventricular and septal wall thickness, and left ventricular ejection fraction are less certain, with contradictory reports when comparing AAS users with non-AAS users, using bodybuilding controls.5

AAS have been found to alter cardiac muscle protein metabolism and have negative effects on endothelial and vascular smooth muscle function. These observations could help to explain the propensity for cardiovascular events and possible effects on cardiac structure and function in AAS users.5

Public Health England's study of injected imageand performance-enhancing drugs (IPED) found that 1.5% of users had HIV, while 9% had ever been infected with hepatitis B and 5% with hepatitis C.6

The results suggested that hepatitis B prevalence among IPED users might be increasing over time.

Also of note, 9% of the study participants reported having ever shared injecting equipment, and unprotected sex with multiple partners appeared to be common.

NICE guidance on needle and syringe programmes (NSP) recommends the promotion of NSP to IPED users.7

Case reports of liver tumours, prostate, renal and testicular tumours and non-Hodgkin's lymphoma in AAS users suggest a possible risk, as do animal studies, although the evidence is not conclusive.8

AAS use can induce a state of hypogonadotropic hypogonadism, due to negative feedback of androgens on the hypothalamic-pituitary axis. This causes low FSH and LH concentrations, and testicular atrophy, and lowers the intratesticular testosterone concentrations required for normal spermatogenesis.

This will present as oligospermia or azoospermia, or abnormalities in motility and morphology and male infertility. Sperm quality tends to recover spontaneously within four to 12 months of discontinuation, but may take longer.1

Significant psychiatric symptoms have been associated with steroid abuse. These occur more frequently and are more severe as the dose of AAS increases.

Several small RCTs have shown significantly increased scores in mania, aggression and anxiety in a small proportion of their participants randomised to receive AAS.9

These studies excluded subjects with premorbid psychiatric diagnoses or a history of illicit drug use, used doses of steroids considerably lower than those used by AAS users and did not combine or stack steroids as many users do, so could underestimate the effects.

Other studies have shown a variety of adverse personality changes in subjects during periods of steroid use compared with 'off cycles' and in AAS users compared with non-AAS users, using bodybuilding controls.9

Case reports have also attributed cases of mania, psychosis and violent behaviour, including homicide, to AAS use.9

AAS use may lead to a dependence syndrome in certain users and associated withdrawal symptoms on attempted discontinuation.9 These include fatigue, craving, muscle and joint pain, decreased libido, insomnia, dissatisfaction with body image, headaches and depression. Prolonged depressive symptoms and in some cases, suicidality, have been reported following discontinuation.9

Acne is a relatively common side-effect and cutaneous striae can occur. Gynaecomastia in men (due to the peripheral aromatisation of exogenous steroids to estrogenic metabolites) and virilisation in women are not uncommon and may or may not be reversible on discontinuation of AAS. Premature physeal closure and reduced adult height can occur when children use AAS.

The alkylated (oral) AAS can cause hepatic toxicity, although the prevalence of this is likely to be low.10 Increases in Hb and haematocrit, and polycythaemia, frequently occur and very heavy workouts can cause rhabdomyolysis. Associated myoglobinuria and renal failure have been reported. Injection site infections and abscesses can occur.3

Some of the long-term effects of AAS may only become visible as the population of AAS users ages. Current observations may underestimate adverse effects which may become clearer in the next few decades.

2. Advisory Council on the Misuse of Drugs. Consideration of the Anabolic Steroids. London, Home Office, 2010.

Coronavirus guidance has been updated to reflect concerns about patients travelling...

Life expectancy has stalled, patients are living longer in ill health and health...