GP funding rose by 3% in real terms across the UK in 2016/17, official NHS data reveal, but GP leaders warned investment remained far below the level required to meet soaring pressure on practices.

The figures show that general practice across the UK received real-terms increases in funding for the second year running.

But the official data on GP funding from NHS Digital come just days after the BMA warned that years of underinvestment have left the profession far short of the investment it needs to maintain high standards of service. The BMA said last week that despite funding pledges in the GP Forward View, general practice in England is on course for a £3.4bn shortfall in funding by 2020/21. 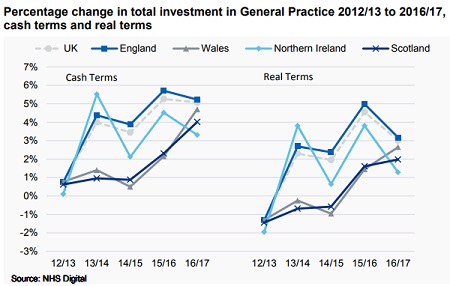 Meanwhile data for the previous financial year published last week by NHS Digital showed a 1.2% fall in average GP income across the UK.

GPC chair Dr Richard Vautrey said: 'The BMA’s GP committee successfully secured an additional £321m for general practice in England in the past year and whilst that has helped struggling practices it will take far greater levels of sustained investment to resolve the pressures on local GP services. With rapidly rising workload pressures, practices cannot be expected to deliver a comprehensive service for as little as £151 per patient per year.

'Many GP practices in England are struggling to cope with rising patient demand that is far outstripping current resources, especially as the profession is facing widespread staff shortages. Patients need the government to step up its funding commitment to general practice and deliver with greater speed its promised extra investment so that GP services are able to keep pace with the rising expectations and needs of the public.'