Eye health will be urgently prioritised in general practice by the RCGP for the next three years to curb its huge impact on patients, the NHS and the UK economy.

The RCGP plans to help GPs to boost referrals for eye complaints, in part through tools to identify eye disease early and prevent sight loss.

A clinical champion will be appointed next year to lead on eye health, with a focus on ageing and sight loss. This will be one of four clinical priorities for the college between 2013 and 2016 alongside CKD, epilepsy and youth mental health.

Two million people in the UK now live with vision quality below the legal driving requirement. This number is expected to double by 2050 as the population ages.

More than a million people's eye conditions could have been prevented with earlier treatment, or could be improved with treatment. 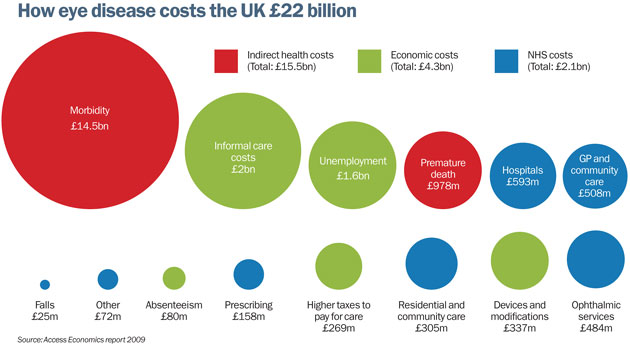 RCGP ophthalmology representative Dr Waqaar Shah, a DH adviser, told GP the college's push was urgently needed. 'Sight loss is quite a big problem in this country,' he said.

'Up until now, eye health hasn't always been prioritised by various bodies - it's a Cinderella condition, much as mental health was 10 to 15 years ago. Now it's prominent in people's minds.'

GPs will get straightforward tools and guidance from the college to help them spot eye conditions early, including what to ask patients to check for potential eye problems.

Dr Shah said it was vital for advice to be easy to incorporate into everyday practice. 'We're very aware that GP consultation time is limited, and that having a difficult tool isn't helpful. It'll be an innovative tool to probe for sight loss at an earlier stage.'

But Dr Shah said it was vital for GPs to be mindful of the effects of sight loss on other conditions, such as depression and fragility fractures. 'GPs can, by being aware, empower patients to take more responsibility for sight loss - it is preventable and is not an inevitable part of ageing.

'For the sake of a test that could have picked up sight loss, a hip fracture could be prevented. The substantial costs to the NHS may be obviated by early intervention.'

Other measurable health and economic gains should result from this, he said. 'Reducing sight loss increases mobility, and frailty and depression are reduced. There's less reliance on carers and support.'

GP commissioners should also take note. 'With investment early on, the long-term cost of secondary care will be less,' he said.

The RCGP will appoint senior clinicians to lead the four clinical priorities in 2013. The closing date for applications is 31 January.