In the UK, TB incidence rates have been falling, from more than 300 per 100,000 in 1910 to 14 per 100,000 in 2007. Changes in wealth and social welfare had precipitated a steep decline in western countries well before the introduction of either BCG vaccination or anti-TB chemotherapy in the 1950s.

Incidence rates in the UK at the beginning of the 20th century were similar to those now seen in sub-Saharan Africa, associated with the HIV pandemic.

In summary, in 2007, 72 per cent of new TB diagnoses were in people born outside the UK.

Pulmonary TB
Pulmonary TB has always been the most common form of TB, accounting for approximately 65 per cent of cases in the UK.

It is clear from the epidemiological data that there is a huge discrepancy between the number infected worldwide and the number of incident cases of clinical TB.

This difference highlights the important distinction between Mycobacterium tuberculosis infection and disease caused by M tuberculosis.

The majority of healthy patients infected with M tuberculosis (latent TB) will control the infection without treatment and only 5-10 per cent will develop active disease (TB) over their lifetime.

However, HIV infection results in the loss of effective immune control and those co-infected with both HIV and M tuberculosis have a 5-10 per cent per annum (not per lifetime) risk of TB reactivation.

Hence, HIV is one of the main factors in global increase in TB.

Clinical features
A high index of suspicion in those from at-risk ethnic and social groups is the key to effective diagnosis in both primary and secondary care. Missing cases of active TB or diagnosing them late is usually due to the diagnosis not being considered.

Most forms of active TB present with weight loss, hence the historical terms 'consumption' and the Greek 'phthisis'. The most common clinical features of pulmonary TB are shown in the box.3

Investigations
Most patients will have presented to their GP with cough and fever and been given a course of antibiotics. Failure to respond to broad-spectrum antibiotics, plus symptoms lasting for several weeks or even months should trigger a consideration of TB.

At this stage, patients should be referred for a chest X-ray and, particularly where index of suspicion is high, three sputa on consecutive days should be sent for a mycobacterial smear (acid fast bacilli, AFB) and culture. 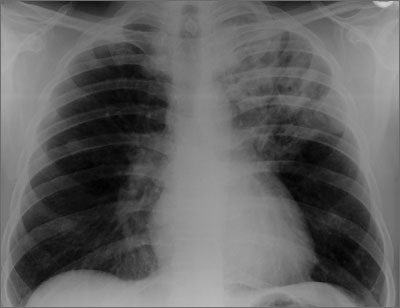 Typical chest radiographic features of pulmonary TB include apical infiltrates and cavitation (see picture). Cavitary disease is most frequently associated with a positive sputum smear and with haemoptysis. However, radiological features of TB are protean, and again atypical radiological presentations are more frequently associated with HIV co-infection.

Miliary disease has a typical radiological appearance with multiple tiny nodules, and a pleural effusion may also be the presenting abnormality.

The diagnosis of TB is confirmed by culture, but this can take up to six weeks on solid media and three weeks with liquid culture systems.

A positive AFB smear, even in the context of suggestive apical chest X-ray changes, does not confirm TB. A number of different environmental mycobacteria can present in an identical clinical fashion, although these commonly cause problems in patients with underlying lung disease such as COPD, bronchiectasis and cystic fibrosis.

Treatment regimens in environmental mycobacteria disease differ from M tuberculosis in terms of the drug combinations and duration of treatment. Rapid confirmation of TB can be achieved by a nucleic acid amplification test (NAAT) on the sputum sample.

A diagnosis of TB is also supported by measuring the immune response against TB antigens. Traditionally, this has been performed by the tuberculin skin test (TST), but more recently interferon-gamma release assays (IGRA) have been developed. However, the role of immunodiagnosis in suspected active TB is limited and should be reserved as an additional test in cases where the diagnosis is unclear.

Current treatments
Treatment for TB should always be initiated and supervised by a physician with experience in TB and ideally with a dedicated TB nurse, which in almost all cases will mean secondary care.

Patients with smear-positive TB are the most infectious and should be started on standard chemotherapy while waiting for culture results.

Drug resistance
It is always good clinical practice in TB management to aim to get a specimen for culture prior to starting therapy because of the risk of drug resistance. Currently, multi-drug resistant M tuberculosis (MDR TB) accounts for 1.2 per cent of UK isolates,2 but >5 per cent of those from Russia and the Baltic states.5

In those with suspected pulmonary TB who are not producing sputum spontaneously, sputum induction or bronchial washings should be performed to obtain a sample.

In non-pulmonary TB, samples for culture should ideally be obtained from tissue sites prior to starting treatment. 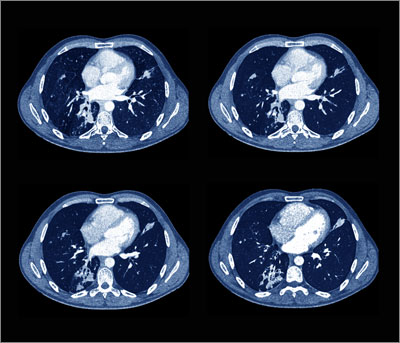 Infection risk
Most patients with TB can be managed as outpatients, although an assessment of infection risk should also be made and appropriate advice given.

If the patient requires admission, usually because the diagnosis is unclear, or because of poor nutritional state or inadequate social support, they should be admitted to a side room while sputum samples are examined for AFB.

Current guidelines suggest there is no indication for the routine use of infection control masks for staff or relatives visiting the patient unless there is a risk of drug-resistant TB, or a procedure involving excessive coughing/expectoration, such as chest physiotherapy, is performed.5

This is important because masks serve to isolate and stigmatise patients - a particular consideration in those from countries where TB is widely perceived as a lethal disease.

The key to successful TB treatment is compliance. In patients where there is concern over adherence, directly observed therapy, usually overseen by a TB specialist nurse, should be given three times per week.

The management of single, multiple or extensively drug resistant M tuberculosis is beyond the scope of this article.

Section 4: Prognosis
In compliant patients with a sensitive organism, the standard six-month regimen results in cure in 95 per cent and relapse rates of 0-3 per cent.5 MRC trials from the 1960s and 1970s demonstrated similar cure and relapse rates with three-times-weekly treatment when compared with standard daily treatment.

Good communication is crucial to achieving high completion rates. Many patients come from marginalised ethnic groups and language barriers can be a significant problem.

Interpreters and TB information sheets in the patient's language are indispensable and each patient should have a named key worker (usually a TB specialist nurse) and a telephone number on which to reach them.

Patients should be warned about drug side-effects, including an orange discoloration of urine and other fluids caused by rifampicin.

A serious and relatively common side-effect is hepatotoxicity, which can be caused by rifampicin, isoniazid and pyrazinamide.

Liver blood tests should be monitored intermittently and any patient who becomes jaundiced should be advised to stop their therapy.

Cure rates in drug-resistant TB are lower and with the emergence of extensively drug resistant TB (XDR TB), initial reports indicated a very high mortality rate. A recent outbreak in South Africa documented death within weeks in 52 out of 53 patients, all of whom were co-infected with HIV.6 However, high completion and cure rates have been achieved in non-HIV- infected XDR TB patients in an outpatient setting with imaginative drug combinations.7

HIV is a major risk factor for the development of active TB and should be considered in all patients diagnosed with TB.

Rather than attempting to assess HIV risk factors, which is unreliable, it is easier to adopt a default policy of HIV testing all patients between the ages of 16 and 65 years with a new diagnosis of TB. This policy is informed by a study of anonymous testing for HIV in a London TB clinic that found a positive seroprevalence rate of 11.4 per cent across various ethnic groups with TB.8

1. The World Health Organization. The top 10 causes of death. www.who.int/mediacentre/factsheets/fs310/en/index.html

2. Tuberculosis in the UK. Annual report on tuberculosis surveillance in the UK 2008. London. Health protection agency centre for infections, October 2008.

6. Gandhi N R, Moll A, Sturm A W et al. Extensively drug-resistant tuberculosis as a cause of death in patients co-infected with tuberculosis and HIV in a rural area of South Africa. Lancet 2006; 368: 1,575-80.