A scheme unveiled by NHS England will reimburse indemnity costs for GPs’ out-of-hours sessions to help cope with extra demand over winter.

More than half of GPs say they have been put off out-of-hours shifts by the high cost of indemnity, according to a GPonline poll.

NHS England said it was responding to concerns that indemnity costs were a barrier to delivering care. A longer-term solution to the problem is being considered. 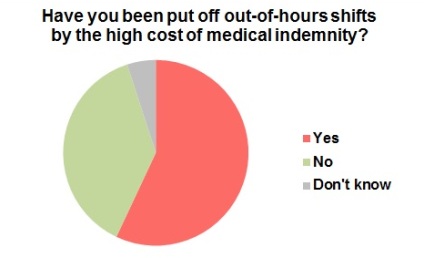 The scheme has been developed with medical defence organisations and will run until March 2016, allowing GPs to commit to more sessions without the need for additional charges.

NHS England director of commissioning Rosamond Roughton said: ‘Rising indemnity costs are having a serious impact on GPs as well as stifling innovation in primary care delivery. We are determined to help resolve this issue and this announcement is just part of the work we are doing with our partners to further support GPs and the wider care primary care workforce.’

A spokesman for Urgent Health UK, which represents GP-led social enterprise providers, said the scheme would ‘help to ease some of the significant pressures on out-of-hospital urgent care providers’.

Medical Protection medical director Dr Rob Hendry said: ‘As a not-for-profit membership organisation our subscriptions reflect the rising cost of clinical negligence and to tackle the cost in the longer term the government must prioritise legal reforms.

‘Membership subscriptions for GPs undertaking out-of-hours are higher because they are exposed to a higher level of risk that can result in larger clinical negligence claims.’