GP practices in England will have to pay up to £850 to register with the CQC this year and those with several premises face thousands of pounds of charges, the regulator has revealed.

Practices operating from a single location will be charged between £550 and £850 depending on list size in 2013/14, the CQC announced on Thursday.

However, these rates rise quickly for practices with several premises.

The fees will cover the cost of registration and inspection during 2013/14.

Fees could double next year because the CQC is only seeking to recover half of its costs in the first year of registration.

CQC chief executive David Behan said: ‘We have managed to keep the majority of fees unchanged this year, and introduced fees for GPs who are new to regulation, at 50% of estimated costs on a sliding scale so that small practices pay less than large ones.'

The CQC will run a consultation on next year’s registration fee in September, with next year's fees announced in March 2014.

The GPC has called for NHS England, previously known as the NHS Commissioning Board, to cover the fees.

GPC negotiator Dr Chaand Nagpaul said: ‘It has always been our position that GP practices should not be incurring any additional expense for CQC registration.

‘We have always argued that it should be centrally funded. We believe that it is in iniquitous that practices in England face this extra charge on the back of workload increases and a reduction in contract funding.’

The CQC also revealed that 87% of people responding to its consultation on the fees disagreed with the proposals for charging practices. This included 332 GPs, who made up 81% of respondents.

Responding to the consultation, the CQC said: ‘We recognise the strength of feeling among GPs at the requirement to pay fees.

'We have set fees in line with our approach to other sectors new to regulation, to generate 50% of total expected cost overall, and sought to do so in way that distributes charges fairly.We propose to introduce fees at the levels set out in consultation.

'We will, however, keep options open and seek to work with the sector to consider fees for the future, as well as reviewing and evaluating our costs. In this way, we will demonstrate to the sector that we are taking their concerns into account.’ 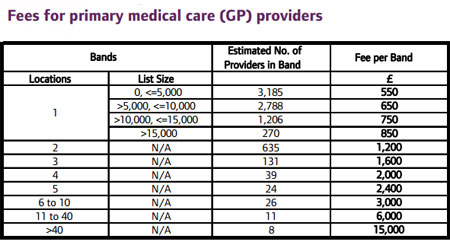 MPs have called on chancellor Rishi Sunak to 'urgently reform the entire approach...

Labour has urged the government to halt the 'stealth privatisation' of dozens of...