Doctors are the most trusted profession, according to a poll of more than 1,000 British adults.

Teachers came second with 86% of people trusting them to tell the truth followed by scientists with 83%. This compares with the ‘ordinary man/woman in the street’ who scored 64%. Only 23% of the people polled trust politicians to tell the truth.

GPC negotiator Dr Peter Holden said: ‘This doesn’t surprise me. It is very much what we have always known. Doctors sacrifice that trust at their peril. I would be worried if we weren’t at the top. Governments should listen to doctors more. The nature of the health service is that it is long term and politicians are short-term opportunists.’

The phone poll was conducted between 9 and 11 February.

Head of political research at Ipsos MORI, Gideon Skinner, said: ‘These results show once again the disconnect that exists between voters and their perception of the political elite. Rebuilding trust in our political system is a challenge that faces all parties.’ 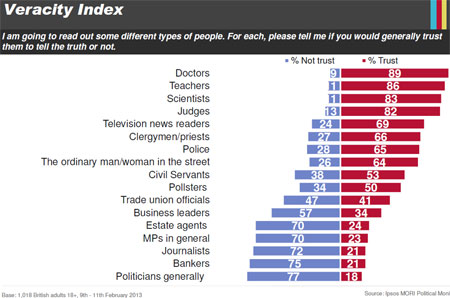 Viewpoint: GPs can support patients with rare diseases without being expert in their condition

Around 1 in 17 people in the UK are affected by a rare disease. Dr Lucy McKay explains...

All children aged between one and nine in Greater London are to be offered a polio...

Medicine shortages have become worse during the past year, leading to increased GP...