GPC member and Medical Practitioners Union president Dr Ron Singer was thwarted by police as he tried to force his way into DoH offices in protest at NHS reforms.

Earlier Dr Singer and representatives from campaign group Keep Our NHS Public spoke in front of Richmond House with a banner reading: 'They lied about health too. Keep our NHS public.'

The group feel increasing competition in the NHS will lead to the closure of NHS hospitals and private sector dominance. The campaigners have attracted a petition of over 400 signatures against the recent Health Bill.

'GPs' power will be swept away by the NHS Commissioning Board,' warned Dr Singer. 'This change will pit patients against GPs. They will not know if they are acting in their best interest or the interest of the consortia,' he said.

Dr Singer said he was concerned 'that GPs will be used to build up consortia and it will be easy for the private sector to move to a dominant role'. 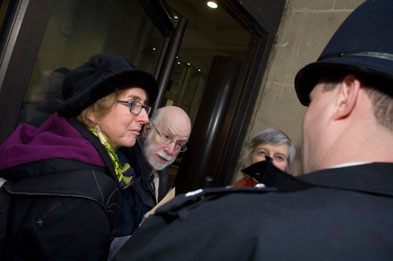 Dr Singer was prevented from entering the building by police

The scuffle prevented DoH staff from getting in and out of the building for about five minutes. Eventually Dr Singer was let in and after about 20 minutes inside, he left after Mr Lansley's diary secretary agreed to take the statement and petition. 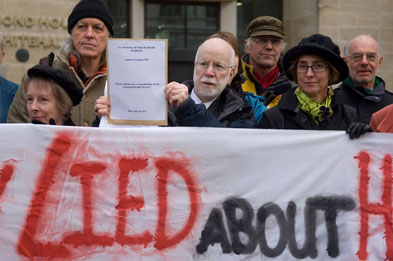 Dr Singer outside Richmond House with the letter for Mr Lansley

Public Health England (PHE) has missed its 31 May deadline for reporting on how factors...

GP practices in England have been told to assess where care has been delayed during...

A GP trainee working in Hertfordshire who has been praised for his ‘charisma and...

GPs have hit out at a lack of warning over changes to advice for patients on shielding...