The case
This 50-year-old woman has experienced problems with the lesion on her left shin for about 10 years. The problem began after she fell and grazed her shin. The lesion had never healed and over the years shiny, reddish-brown and yellow patches had spread around the painful ulceration. 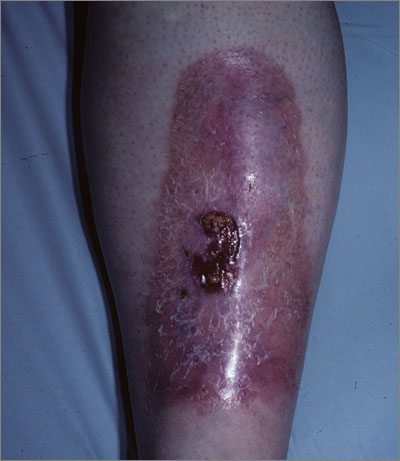 Diagnosis and Management
A diagnosis of necrobiosis lipoidica was made. More recently, the patient had been found to have diabetes requiring insulin. Good control of her diabetes had not improved the skin problem.

The cause of necrobiosis lipoidica is not known but it does appear to be more common in those with diabetes. It is more common in women and, although it may present at any age, it usually develops around the age of 30. The diagnosis can be confirmed by biopsy.

Advice should be given regarding protection of the legs from injury with support stockings and rest. In the earlier stages, topical or intralesional steroids may lessen inflammation at the active borders of the lesion but if used later may compound the problem of atrophy.

Aspirin, dipyridamole or pentoxifylline are suggested as it has been thought that platelet-mediated vascular occlusion might play a part in the condition. Other approaches that have been tried include oral ciclosporin, tacrolimus, infliximab, PUVA therapy and lasers.

In some cases, excision of the lesion and grafting has been successful but poor healing or recurrence is a risk.

Retired Derbyshire GP Dr Om Prakash Chawla, who was known for his warmth and kindness,...