THE CASE
This man was in his early sixties. His origins were in the desert regions of North Africa but he had moved to the UK 10 years previously. 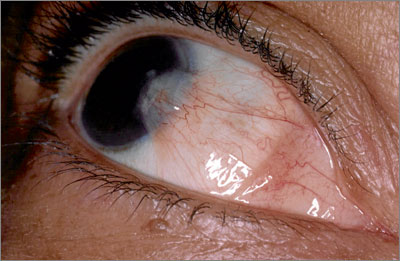 He had first noticed the changed appearance of his eye about 20 years ago. It had started as a small raised, reddened area in the nasal corner of his eye. Apart from a slight itching at times it had not bothered him, but over the years it had increased in size and was spreading across his eye. He was afraid that if it spread further, it might interfere with his vision.

WHAT IS THE DIAGNOSIS, MANAGEMENT AND DIFFERENTIAL DIAGNOSIS?
On examination, a wing-shaped vascular thickening could be seen extending from his nasal conjunctiva, across his iris and encroaching on the pupil. He was referred to the ophthalmologist for advice, who recommended excision of the pterygium under a topical or local anaesthetic.

Pterygium is most common in men over the age of 40 who have been exposed to increased UV light. There appears to be a genetic link.

It is caused by an elastotic degeneration of collagen and fibrovascular proliferation, with an overlying epithelium. As in this patient, the lesion usually first appears on the nasal conjunctiva and extends onto the nasal cornea.

Growth of the lesion may be slow in some but more rapidly progressive in others. Problems arise when there is interference with vision.

UV-blocking sunglasses should be advised in order to reduce further light exposure. The condition can be dealt with surgically but this is not necessary unless the patient experiences irritation, discomfort, visual impairment or requests the procedure for cosmetic reasons. Local symptoms may be relieved by the use of artificial tears.

Occasionally a short-term course of a mild topical corticosteroid may be recommended but this would normally require specialist advice.