The case
This young man attended the surgery in great distress. His girlfriend was refusing to see him if he did not do something about his smelly feet. They itched at times and were also tender. On examination, the magnitude of his problem became apparent. The offensive smell that emanated from his sweaty feet was overpowering. The soles of his feet displayed a symmetrical pattern of reddish/purple discolouration, with areas of small pits. The discolouration covered the weight-bearing areas of his feet. What is the diagnosis, management and differential diagnoses? 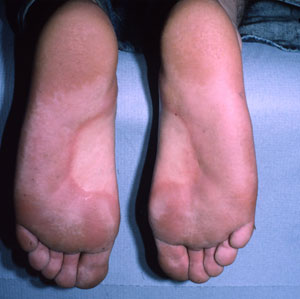 Diagnosis and management
A diagnosis of pitted keratolysis seemed clear. A skin scraping was taken from the affected area to confirm the presence of Kytococcus sedentarius or corynebacterium and actinomycoses, which cause the problem, and to exclude the possibility of tinea. Pitted keratolysis is a common problem at any age, in those that wear occlusive footwear such as trainers and boots. He was advised to discontinue these and to wear absorbent cotton socks that he could change frequently, so that sweat would be more easily absorbed.

Apart from this, he was encouraged to soak his feet twice a day in a 5 per cent solution of formalin and to use a roll-on antiperspirant such as 20 per cent aluminium chloride. Should this be insufficient he could apply a topical antibiotic such as fusidic acid, erythromycin or clindomycin twice a day and if it persisted oral erythromycin 250mg four times a day should settle it within a few weeks. The possibility of iontophoresis was mentioned.