A 64-year-old man presented complaining of a persistent cough for several weeks. He felt generally lethargic. He was fairly well and was on no medication, although he had suffered from recurring respiratory infections during the winter months. 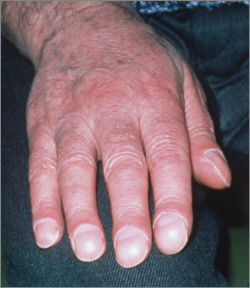 He smoked 20 cigarettes daily and had done so since the age of 15 years.

Examination of his chest was unremarkable, but there was an increase in the soft tissue of the distal part of his fingers.

He was prescribed antibiotics for his cough and a chest X-ray was requested.

As it advances, there is loss of angle at the base of the nail and an increase in its curvature transversely, until the whole finger tip becomes clubbed and the overlying skin stretches, taking on a polished appearance. The mechanism of clubbing is unknown and because it is painless, the patient is usually unaware of the changes. Clubbing is an important sign because it may indicate a serious underlying condition. It is associated with cyanotic heart conditions, with liver cirrhosis, with lung conditions including carcinoma and chronic septic conditions such as lung abscess or bronchiectasis, and with gastrointestinal conditions such as Crohnis disease and coeliac disease. There is no treatment for clubbing.

In this case, the chest X-ray revealed a tumour of the lung.

- Contributed by Dr Gwen Lewis, a GP in Windsor, Berkshire