Women in late pregnancy are to be offered pertussis jabs as whooping cough cases continue to rise, the DH has announced.

GP practices can order the vaccine through Immform from Monday. They will receive £7.67 per dose as part of a National Enhanced Service organised by PCTs, following negotiations between the GPC and NHS Employers and the DH.

Practices have been asked to decide how best to organise administration of the vaccine. Pregnant women should be offered the vaccine at their next regular antenatal visit between week 28 to week 38 of pregnancy. Optimally, it should be by week 32.

The UK is currently experiencing the largest surge of pertussis since the early 1990s (see graph below), with cases running well above the most recent surge in cases in 2008.

There have also been nine pertussis-related deaths in infants so far in 2012, including three in August.

Dr Kassianos said GPs were making an excellent start in attempting to stop the spread of pertussis infection. ‘With this new announcement, we are targeting first the most vulnerable in our communities; the newly born babies.’

‘By immunising mothers before infants are born, we are passing on to the infants immunity and create a safer home environment for them. This is the best first step we can take for now.’

He added: ‘There is financial help for GP practices and I know GPs want to protect their most vulnerable patients. I am sure every practice will welcome this announcement and will make this campaign a priority.’ 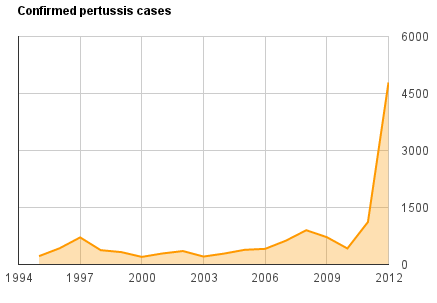 The HPA’s head of immunisation Dr Mary Ramsay said the agency has been ‘very concerned’ about the continuing increase in whooping cough cases and related deaths.

‘We welcome the urgent measure from the DH to minimise the harm from whooping cough, particularly in young infants, and we encourage all pregnant women to ensure they receive the vaccination to give their baby the best protection against whooping cough,’ she said.

‘It’s also important we continue to remind all parents to ensure their children are vaccinated against whooping cough to continue their protection through childhood.’

The HPA said that young infants are at highest risk of severe complications and death from whooping cough because babies do not gain benefits from vaccination until they are around four months old.

Protection for newborns
Dr David Elliman, an immunisation specialist at the Royal College of Paediatrics and Child Health, also welcomed the DH's announcement.

‘This will mean that the mothers are less likely to catch the disease themselves and so won't pass it on to their new born babies,’ he said. ‘In addition, they will pass on some immunity to their babies until they themselves are immunised.’

He added: ‘At the same time, it is important to ensure that all children receive a full course of the vaccine and that this is not delayed. The vaccine is very safe with no more side effects or contraindications than the other routine childhood vaccines.’

DH advisers are confident there is enough of the Repevax vaccine, which includes pertussis antigens, available for a temporary six-month programme without risking disruption to routine childhood vaccination.

Although there are limited data on the use of the vaccine in pregnancy, there are no safety concerns, according to minutes from a meeting of DH immunisation advisers on 30 August.

Nevertheless, advisers said it will be 'very important' to monitor the safety of the vaccine when used in pregnant women. This will be done by the MHRA.