More than a third of GPs say PCTs are ignoring a government order not to ration treatment on the basis of cost alone, a GP survey shows.

In the poll of 682 GPs, 35% said local commissioners are restricting access to services on the basis of cost alone, using blanket bans. A total of 90% of GPs backed GPC calls for the DH to create a national list of treatments the NHS will not fund, to eliminate the postcode lottery of rationing.

'They are clearly not doing that and need to start putting words into action,' he said. 'This will be a big challenge for the new health secretary, and one he needs to address quickly.'

Northumberland LMC secretary Dr Jane Lothian said: 'We need an open, honest debate about what the NHS is for. It's not a "just keep everyone alive" service: it's about keeping the population healthy.' 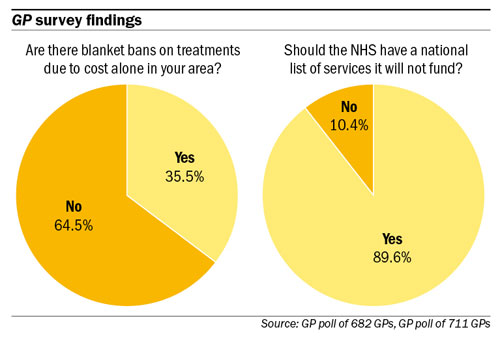 GPs said commissioners are simply raising thresholds so most patients are not eligible for treatment.

One GP said: 'They have devised all sorts of hoops that patients have to jump through to qualify for operations, while disingenuously pretending it is for patients' good and saving money has nothing to do with it.'

In June, a GP investigation found 90% of PCTs had imposed restrictions on procedures deemed 'non-urgent' or of 'low clinical value'. PCTs planned to save £100m a year through these measures.

The GPC has since called for a national list of low-clinical-value procedures to ensure patients are treated 'fairly and consistently'. Dr Lothian said this would be 'extremely helpful' for GPs, putting them in a stronger position when patients demand care: 'A GP could then say: "You don't meet the criteria, but it's not just me saying it; you'll get the same answer from the doctor in the next town".'

Kent GP Dr Julian Spinks said a national list would mean 'decisions about what to fund or not are made on good clinical grounds and not just on how commissioners can save a set amount of money'. But he warned the move to smaller CCGs may worsen variation in decision-making.

Responding to the GPC's call for action, a DH spokeswoman said: 'If patients need treatment, they should get it when they want it and where they want it. If local health bodies stop patients from having treatments on the basis of cost alone, we will take action against them.'