England's cancer survival rates risk falling further behind the rest of Europe because PCTs are failing to invest in diagnostic services and plan for future demand.

In the past two years, the DH has repeatedly urged PCTs to begin planning extra capacity in endoscopy services ahead of a long-term drive to improve early cancer detection.

But a GP investigation found half of 94 PCTs that responded took no action in 2011/12 to increase capacity despite these warnings.

Many trusts argued that existing services are sufficient. Others said providers have responsibility for ensuring adequate capacity.

However, advice from senior NHS figures suggests this may be wishful thinking.

In August 2011, NHS medical director Sir Bruce Keogh warned the NHS to prepare for a 50% increase in two-week wait referrals for suspected bowel cancer as a result of the bowel cancer awareness campaign, which began in January 2012.

Bowel cancer is the UK's third most common cancer, killing 16,000 people a year. 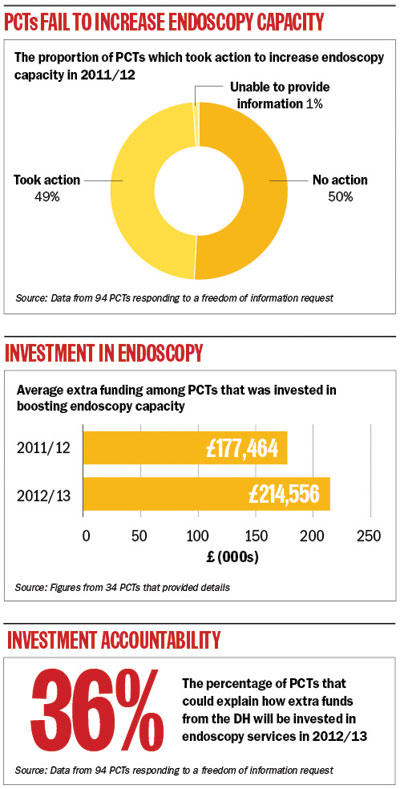 Extending the bowel cancer screening age to 75, introducing flexible sigmoidoscopy and increasing investigations would require extra capacity in the long term, it said.

GPs and charities were warning that endoscopy capacity was 'at its limit', before the bowel cancer awareness campaign even began (GP, 25 January). Our findings suggest many PCTs had not commissioned extra capacity to cope.

In the long term, the DH wants the NHS to send more patients for diagnostic tests to catch cancer earlier. Better access to endoscopy is closely tied to its aim to save an extra 5,000 lives by 2014/15.

The GP investigation shows much work is still to be done if this goal is to be reached.