This patient returned from a walking tour ruined by blisters resulting from heavy, ill-fitting walking boots.

Antiperspirants, and a lubricating agent to reduce friction are helpful, as are neoprene insoles, acrylic-based socks or thin polyester socks, together with a thick wool sock and well-fitting shoes.

If blisters are left intact it helps to protect from infection. Hydrocolloid dressings on open areas ease discomfort and promote healing. Antibiotics may be necessary if secondary infection occurs. 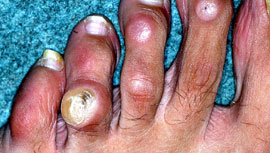 Corns occur as the result of repeated pressures on the area, hypertrophy of the stratum corneum and keratinisation.

The podiatrist can relieve symptoms by shaving calluses, enucleating corns, using pads to relieve pressure and advising about footwear. Complications include infection and ulceration due to slow necrosis for which antibiotics and/or antiseptics or astringents may be used. 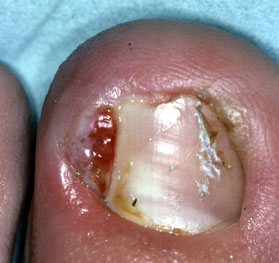 For this 15-year-old boy ingrowing toenails were more than a nuisance. From time to time it became infected and oozed pus.

In the surgery, elevation of the nail had been attempted by inserting a 'cotton wisp' under the edge of the nail and soaking the foot in an antiseptic solution. No antibiotics had been required as there had been no evidence of lymphangitic spread.

Alternatives include partial nail removal and cauterisation of the nail matrix. He was advised to avoid tight fitting shoes and to always cut his nails straight across. 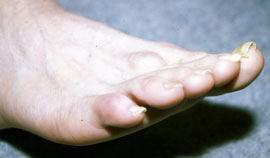 This man attended the surgery with complaints of pain and a swelling over the second metatarsal of his foot. He recalled no recent injury but had just returned from a walking holiday. On examination the pain was exacerbated by movement of the second toe. There was no evidence of inflammation that might have suggested an infective element to the condition.

He was advised to rest the foot, take an NSAID to ease the pain and offered an injection of corticosteroid into the area to ease symptoms. If infection occurs it is more likely to be related to a recent injury or caused by a gonococcal infection.

This elderly woman had been confined to her home because of the pain she suffered when the overgrown nail cut into the adjacent toe. The commonest cause of onychogryphosis is trauma, either from an injury or from failure to regularly trim the nails, which then repeatedly bang against the shoe as the nail lengthens. The nail becomes misshapen, assuming a spiral like a ram's horn.

The problem can be easily resolved by the chiropodist who can regularly trim the nails. Occasionally, avulsion of the nail may be recommended. 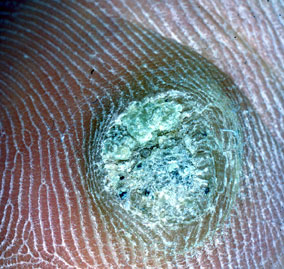 Plantar warts are caused by HPV 1,2,4 or 63. Transmission is facilitated by walking on wet surfaces.

They usually occur in children and may be single or multiple. Spontaneous regression usually occurs within six to eight months. Treatment is required only if they are painful, persistent and/or affect walking.

A small vesicular lesion appears and sharply interrupts the dermal ridging, distinguishing it from a corn. Dermal capillaries are seen in the lesion.

Topical salicylic acid, formaldehyde or silver nitrate can be bought OTC. Cryo-therapy or laser therapy may also be used. 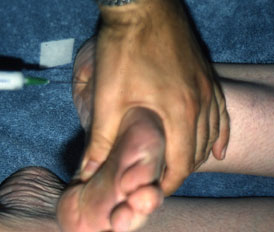 Plantar fasciitis is commonly seen in general practice. It occurs more often between the ages of 40 and 60 and is thought to be related to repeated trauma to the fascia at the heel, particularly in the overweight.

The patient complains of pain under the heel when walking on hard surfaces, so much so that often they opt to walk on their toes. However, standing on the toes may sometimes actually aggravate the pain. On examination there is tenderness over the anterior-lateral aspect of the heel. 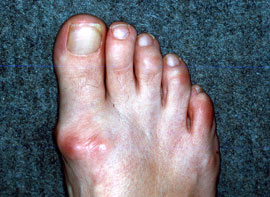 This woman was having problems with pain, swelling and stiffness of the right metatarsophalangeal (MTP) joint. X-ray showed advanced osteoarthritis in the MTP joint.

She was prescribed a ketoprofen gel and was to be admitted for manipulation of and corticosteroid injection into the joint. This degenerative arthritis of the first MTP joint is thought to result from wear and tear over the years and affects both big toes in the majority. It usually presents in middle age. Often symptoms can be controlled with adjustment of footwear and analgesics but some will require arthrodesis.