Dr Alastair Hay and Dr Veronica Cox summarise the recent NICE guidelines on diarrhoea and vomiting in children under five.

Case study
You are a GP doing morning telephone triage and you have been telephoned by a mother about her five-month-old baby, Susie, who has had a sudden onset of vomiting overnight, isn't taking any breast milk and has a temperature of 38 degsC. How would you distinguish gastroenteritis from other more serious presentations of diarrhoea and vomiting? 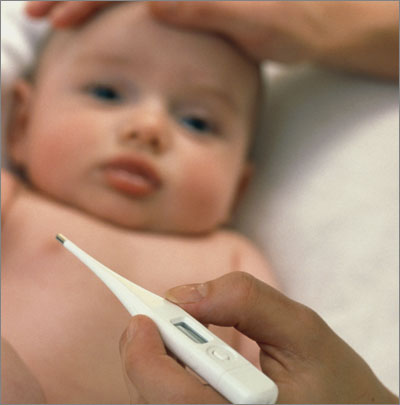 Diarrhoea and vomiting are often distressing for the child and family and, although rare in the UK, the associated dehydration can be life threatening.

Most cases can be managed at home with advice from healthcare professionals. The NICE guideline, Diarrhoea and vomiting in children under five, offers tools to assist with the diagnosis and assessment of dehydration, gives practical guidance on the use of fluids and food, and advice on which children should be referred to secondary care.

Gastroenteritis should be suspected if there is a sudden change to loose or watery stools or onset of vomiting. The diagnosis can be difficult before diarrhoea commences, but a history of an unwell contact or known food or water contamination can help. Several signs and symptoms can help to indicate diagnoses other than gastroenteritis and should be elicited to help guide management (see box).

Susie has none of the distinguishing symptoms but does have a sibling with a two day history of vomiting and diarrhoea. What investigations would you request?

Viruses account for the majority of cases of gastroenteritis. For this reason NICE has recommended stool microbiological investigations only if septicaemia is suspected, if there is blood in the stool or if the child is immunocompromised.

It can also be considered if the child has recently been abroad, the diarrhoea has not improved by day seven or you are uncertain about the diagnosis.

Blood biochemistry is only routinely recommended for children given IV fluids or if there are signs of hypernatraemia.

Dehydration
The mother is worried that Susie is dehydrated and needs to be admitted to hospital. How would you assess if this is necessary?

Susie is at risk of dehydration as she has stopped breastfeeding and is less than six months old. Other risk factors for dehydration include infants of low birth weight; more than six diarrhoeal stools in the past 24 hours; and children with signs of malnutrition.

NICE recommends that children at risk of dehydration are assessed face-to-face.

You assess Susie face-to-face later that morning and find no red flag symptoms but evidence of reduced urine output suggesting some dehydration. How would you manage her?

It has been shown that regular breastfeeding decreases the risk of dehydration during gastroenteritis. Susie should be encouraged to breastfeed and offered low osmolarity oral rehydration solution (ORS).

When signs of clinical dehydration are present, NICE recommends 50ml/kg of low osmolarity ORS over four hours. For an average five-month-old girl weighing 7kg this equates to 350ml plus her usual breast milk. It should be given little and often. If Susie refuses to take sufficient ORS, she should be offered extra breast feeds. Fruit juices and carbonated drinks, including flat cola, should be avoided.

Management
The mother should be advised that rehydration is the main treatment for gastroenteritis. NICE advises avoiding antidiarrhoeals. Although loperamide has been shown to decrease the frequency of diarrhoea, it increases the risk of gastric ileus and is not licensed in children under five years.

Few children in primary care will be given antibiotics, as NICE advises they should only be given to children with suspected or confirmed septicaemia, extra-intestinal spread of bacterial infection, children younger than six months with salmonella gastroenteritis, malnourished or immunocompromised children with salmonella gastroenteritis and children with Clostridium difficile-associated pseudomembranous enterocolitis, giardiasis, dysenteric shigellosis, dysenteric amoebiasis or cholera.

Susie's mother is still concerned. How would you advise her?

It is important to provide a safety net. She should be advised to contact a healthcare professional if further symptoms of dehydration develop; for example, if she appears to be deteriorating or becomes lethargic, symptoms do not resolve as expected, the child continues to refuse feeds or ORS, or persistently vomits.

Continued vomiting
You arrange to call Susie's mother later in the day. When phoned she reports that Susie has been unable to tolerate the ORS, is continuing to vomit, and has become more lethargic. What would you do now?

Children with symptoms suggesting shock or children with red flag symptoms or signs should be referred to secondary care for a further trial of ORS, or for IV fluids.

Susie was admitted to hospital and responded well to ORS given by nasogastric tube. On discharge, the following day, she still has loose stools but is able to breastfeed. Her mother phones to see what she should do next.

The mother should be reassured that Susie is likely to be over the worst of it. She should be reminded how to recognise signs of dehydration and advised that the diarrhoea may last for up to two weeks.

After rehydration there is a risk of recurrence of dehydration but appropriate fluid management can decrease the likelihood of this. Full strength milk or normal feeds can be given straight away and solid food slowly reintroduced. There is no evidence for the use of lactose-free formulas. Fruit juice and carbonated drinks should be avoided until the diarrhoea has stopped.

Rule out serious illness
Diarrhoea and vomiting are common presentations in primary care. Ruling out serious illness is important but in most cases the cause is gastroenteritis, which can be managed safely at home with advice about appropriate fluids, its natural history and safety netting.

NICE guidelines should be used to assess the severity of dehydration, determine appropriate fluid and nutritional management and advise on measures to prevent further spread.