Consider the symptoms and treatments for DCD, by Professor Amanda Kirby.

Developmental co-ordination disorder (DCD) is a heterogeneous disorder, often known in the UK as dyspraxia.

Children with DCD have persistent and pervasive difficulties with co-ordination affecting them in more than one setting and over a period of time.

A UK study has recorded levels of severe difficulties in 2 per cent of the population with another 4 per cent having moderate difficulties.1 Up to three times as many boys as girls have been noted to have DCD. In about 70 per cent of children, difficulties can continue into adulthood.2

Not all children have all features but rather a combination. A key aspect of DCD is a difficulty learning new or unfamiliar skills. These children usually take longer to become confident and competent compared with their peers. The difficulties the patient presents with are unexpected given their level of intelligence and age.

Associated symptoms
Children with DCD often have difficulties planning their movements, time management and self-organisation skills. These are also common to other developmental disorders, such as autistic spectrum disorders (ASD) and ADHD.

For a diagnosis of DCD, symptoms of motor co-ordination should meet the diagnostic criteria in the Diagnostic and Statistical Manual of Mental Disorders-IV or ICD-10 (DCD),3,4 and be associated with at least moderate social and/or educational or occupational impairment based on testing using a motor assessment test.

This is commonly the movement assessment battery for children-2 test5 and is usually done by a physiotherapist or occupational therapist.

Co-ordination difficulties need to be present in two or more settings such as social, familial, educational and/or occupational settings.

Distinguishing the disorder
DCD has been commonly associated with a range of learning difficulties such as ADHD, ASD, specific language impairment and dyslexia.6,7

Overlap with these conditions occurs in about 80 per cent of cases to some degree. However, the child may not meet all the criteria to receive a diagnosis and may not be recognised as having the difficulties and so may not receive support.

The key role that motor co-ordination difficulties plays in the lives of children with ASD and ADHD is also increasingly being recognised, as is the need to check for DCD when these other disorders are diagnosed.

Motor difficulties may also be associated with known genetic disorders such as Klinefelter's syndrome.

There is increasing biological and genetic evidence to support the construct of DCD. The overlap with ADHD and DCD is a focus for genetic work.

Successful management
In 2006, UK consensus guidelines were written providing effective and consistent management models based on a good evidence base.8

Early identification can result in the child receiving focused intervention from occupational therapists to minimise the educational and social impact and to guide the teacher and parents.

Parents, teachers and health professionals must work together. Parents can feel frustrated by poor interdisciplinary communication and relaying the history again and again to different people.

Finding a hobby or sport that the child can succeed in is important, to provide a focus for physical activity and to prevent future weight gain.

Discuss areas of strengths in the child that can be developed in order to maintain self-esteem. Discuss opportunities for social interaction, especially in the teen years as young people can become isolated at this stage. Consider guidance with organisational and independent living skills early on.

Times of transition need planning and support and should be considered early so they run smoothly. Consider the overlap with other developmental disorders such as speech and language difficulties and attention difficulties as these are common. 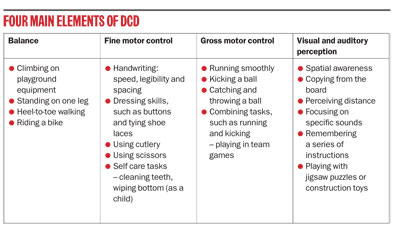 7. Kadejso B, Gillberg C. The Comorbidity of ADHD in the General Population of Swedish School-Age Children. J Child Psychol Psychiatry 2001; 42: 487-92.