Psoriasis is one of the most common dermatological problems, with a reported prevalence of 1-4.8 per cent of the UK population1 and incident rate of 14 per 10,000 person-years.2

There is a bimodal age of onset with an early peak at age 16-22 years and a later peak at 57-60 years.3 The aetiology of psoriasis is multi-factorial and includes genetic susceptibility and environmental factors.

Environmental factors
Infections may be associated with psoriasis; the classical association is with streptococcal infection of the throat and acute guttate psoriasis.7

A more recent association is with HIV infection and sebo-psoriasis.

Drugs which might trigger or exacerbate psoriasis include lithium, beta-blocker, antimalarials and withdrawal of systemic corticosteroids.8 Sunlight usually improves psoriasis, but in 5.5 per cent of patient it can exacerbate the condition.9 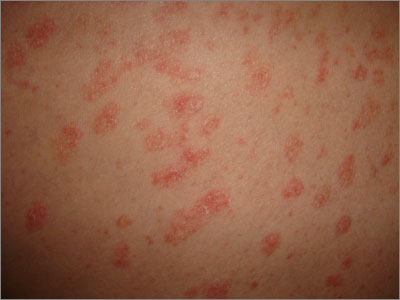 A high alcohol intake is associated with more severe disease10 and patients who smoke more than 15 cigarettes/day are more likely to have pustular psoriasis (odd ration 3.9 in women, 1.4 in men).11

Pregnancy can improve psoriasis in 40 per cent of women, however it then deteriorate in 54 per cent at three months post-partum.12

Diagnosis and clinical features
Psoriasis is usually diagnosed clinically and the most common form of psoriasis is chronic plaque psoriasis or psoriasis vulgaris. There are many other clinical variants, which are thought to be different disease with a common reaction pattern that are grouped together into the diagnosis of psoriasis.

In addition to skin lesions, psoriasis can affect the nails and can also cause joint disease.

Psoriasis vulgaris typically presents as sharply demarcated and salmon-pink or red coloured scaly plaques with a symmetrical distribution involving extensor surfaces (elbow, knee, buttocks), scalp and trunk. The lesions are usually asymptomatic, but can be pruritic or even have a burning sensation.

Guttate psoriasis is seen in approximately 2 per cent of patients. It typically presents as a sudden onset of small (5mm) monomorphic lesions, distributed over the trunk and proximal limbs. It usually affects children and young adults and is triggered by acute streptococcal infections. A third of patients with guttate psoriasis develop chronic plaque psoriasis in later life.

Flexural or inverse psoriasis typically affects the groin, vulva, axillae, submammary folds and gluteal cleft with symmetrical involvement. Often there is little scaling and the erythematous skin is sometimes misdiagnosed as intertrigo.

Palmar plantar pustulosis is a specific type of psoriasis typically affecting the hands and feet of middle aged women and is often associated with smoking. The pustules are sterile and are due to the inflammatory process rather than infection. It is often resistant to treatment and systemic agent may be required.

Unlike palmar plantar pustulosis, generalised pustular psoriasis is a more unstable form of psoriasis consisting of widespread pustules over the trunk and limbs. There is often absence of psoriasiform plaques as the unstable nature of the condition does not permit plaques to form. Along with erythrodermic psoriasis (which can precede it), generalised pustular psoriasis is considered a dermatology emergency requiring urgent secondary care assessment. Both are more frequent in patients with psoriatic arthritis and can be precipitated by infection, hypocalcaemia, certain medications and withdrawal of corticosteroids. 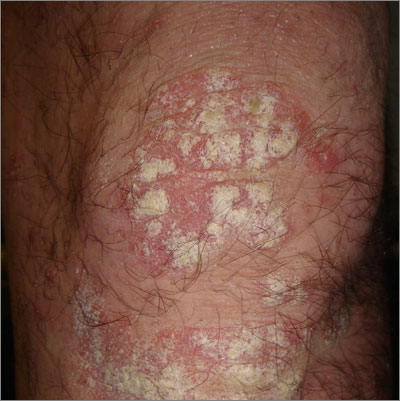 Prognosis
Psoriasis is generally considered a lifelong condition, but in a study involving 5,600 psoriasis patients, it was report that 39 per cent of patient had spontaneous remission over 1-54 years.13 The severity of an individual’s psoriasis may vary with time and even if there is spontaneous remission the possibility of relapse remains.

Management
An assessment of patients’ expectation and the socio-psychological impact of their psoriasis is the key to effective management. It is realistic to improve the severity of psoriasis to allow a normal life; it is unreasonable to aim for complete permanent clearance.

Topical treatments
Emollients are essential in the management of psoriasis as they can improve erythema, scaling and itch in a manner that is additive to the effects of other agents – both topical and systemic. The choice of emollient depends on the patient’s circumstances and preferences; addressing the patient’s needs will assist compliance.

Topical steroids are effective and safe in limited localised forms of psoriasis. Most patients treated with high-potency topical steroid will achieve improvement within two weeks. Local adverse effects may include epidermal and dermal atrophy, striae, steroid rosacea and suppression of the pituitary-adrenal axis particularly if more than 7g of 0.05% clobetasol propionate or 0.05% betamethasone dipropionate is used per day.14

Vitamin D analogues (calcipotriol, calcitriol and tacalcitol) have become the first-line treatment in psoriasis. Calcipotriol (50 microgram/g) applied twice daily resulted in significant improvement (59 per cent reduction in PASI) in 74 per cent of patient after eight weeks of treatment.15 A study has suggested that the efficacy of calcipotriol is superior to or tacalcitol.16 Combination of calcipotriol with betamethasone dipropionate was shown to have superior efficacy when compare with either drug used alone for psoriasis affecting the trunk and limbs17 or scalp.18

Coal tar, despite its smell, is an important ingredient in some emollients, shampoos, ointments and steroid preparations. It is a useful adjunct if the psoriasis is pruritic. Topical dithranol is has become much less common due to side-effects including irritation and irreversible staining of clothing, although a liposomal preparation can avoid most of these.

Phototherapy
Phototherapy involves the use of ultraviolet light in the form of ultraviolet B (UVB) or psoralen with ultraviolet A (PUVA). PUVA is more effective but also more carcinogenic than UVB.19 In some patients the remission can be for six months or longer while in others it may only last a few weeks.

There is a lifetime maximum dosage recommended for PUVA and most dermatologists use narrowband UVB as first choice, reserving PUVA for those patients who are recalcitrant to UVB. Phototherapy is usually delivered in the secondary care setting as the risks include sunburn, photoaging and carcinogenesis.

Systemic therapy
Systemic medication is useful in patients who fail to respond to topical or phototherapy or those who have significant psoriatic arthritis. Agents such as methotrexate, ciclosporin, acitretin and hydroxyurea are the most frequently used and should be initiated by secondary care dermatologists although shared care for established patients may be appropriate.

Currently available products include infliximab, etanercept and adalimumab, which all target tumour necrosis factor. In addition, efalizumab targets CD11a, which is an adhesion molecule (although this drug has been withdrawn in the USA and has a licence suspension in the UK and Europe). All agents act as immunosuppressants and can be very efficacious but also have a risk of provoking infections such as reactivation of latent TB.

The newest biological agent is ustekinumab, which is an interleukin 12/23 antagonist that showed great promise in clinical trials. Ustekinumab was launched in January 2009.