One in seven GPs say more than a fifth of sessions at their practice were covered by locums in the last year, according to a GPonline survey.

A total of 14% of 352 GP respondents said that over a fifth of sessions provided by their practice had been filled by locums over the past year.

The majority (55%) said that the proportion of sessions filled by locums has risen throughout the past year, with this rising to two thirds (63%) over the past three years.

The results suggest practices are becoming ever more reliant on locums to keep afloat amid rising demand for services and long-standing difficulties recruiting full-time GPs.

It also recognises a shift in the GP workforce where doctors are increasingly choosing to work as locums over more traditional partner and salaried roles to escape workload pressures.

The top 2% said locums were carrying out over half of the sessions provided by the practice. 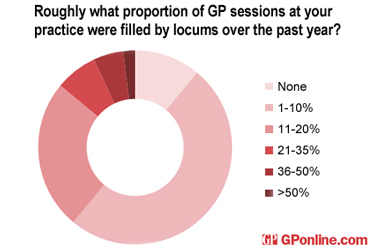 The results come as GPonline revealed that almost a quarter of GP vacancies have remained unfilled for over a year.

Many GPs said their practice was taking on locums for prolonged periods to cover partners and salaried GPs during long-term sickness and maternity leave – and to plug gaps arising through unfilled places.

One locum GP said they were covering up to half of the sessions at the practice they were working at after being drafted in to replace a GP who retired from the practice.

‘Since joining the practice where I work, I work 10 hours over two days at four sessions per week, which more or less equates to the clinical consultations the single-handed GP partner carries out,’ they said.

A GP partner – whose practice relies of locums to cover up to a third of sessions – said their practice had been left with an open vacancy for over seven months. Despite the cover, the retiring GP was ‘working until the end of the year to help out’.

Yet another with up to half of sessions filled in by locums said: ‘We took over another practice which would otherwise have closed. But we’ve been unable to recruit a partner or salaried GP.’

Others are struggling to secure locums as soaring demand outstrips the number of doctors available to work sessions.

One salaried GP, whose practice relies of locums to provide up to a fifth of sessions, said they hired them ‘whenever available’, but were left under-doctored ‘most of the time’.

Despite GP increasingly needing locums to fill shifts and shortages in some parts of the country, there is no official measurement of how many locums there are in the UK.

The National Association of Sessional GPs (NASGP) estimates that around 17,000 GPs – around 25% of the profession – work as locums.

‘GPs are trying their level best to provide services to patients, but they're struggling to do so because they're not able to recruit permanent places within their practices,’ he said.

‘We’re also increasingly seeing that some GPs are moving away from practices to become locums because of the workload pressure that they're under. Working as a locum is seen as a way to manage that pressure in a more sensible and realistic way.’

He added that employing locums long-term was piling added stress onto practices. ‘Even with the best locums, some of the elements will still fall on the permanent members of staff at the practice.

‘And the fewer of them you have, the more that workload burden falls on their shoulders, and therefore it adds increasingly to their own stress and adds to burnout. It becomes a vicious circle.’

Planned rotations of junior doctors in London - including GP trainees - have been...