How to classify obesity, and when and how to initiate further treatment, such as bariatric surgery. By Mr Andrew Jenkinson

Obesity is caused by a failure of the energy-regulating system of the body. This results in a long-term positive energy balance, with storage of the excess energy predominantly within adipose tissue.

Excess adipose tissue can lead to the release of pro-inflammatory cytokines that contribute to metabolic changes and increase the risk of comorbid conditions, such as type 2 diabetes and hypertension.

Energy storage in times of food excess was essential for evolutionary survival. This safeguarded against times when food might be scarce or extra reserves would be needed, for example in illness or pregnancy.

A complicated series of regulatory negative feedback loops have evolved to maintain weight within a set point determined by genetic, epigenetic and environmental factors.

One of the most important hormones integral to energy regulation is leptin, produced by adipose tissue. Its levels mirror the amount of fat in the body, so an overweight person will have high levels, while an underweight one will have low levels.

However, once a certain level of obesity is reached, cytokines released by the inflamed adipose tissue (interleukin-6, TNF-alpha, CRP) are thought to block the action of leptin, resulting in the patient developing leptin resistance. This means they lose their normal homeostatic regulatory control of appetite and metabolic rate.

Leptin plays an important part in defending energy reserves during dieting, which may explain why long-term weight loss is so difficult for dieters.

Leptin levels fall by 20% immediately after the onset of a very low- calorie diet (independent of fat loss), leading to development of a voracious appetite, a craving for high calorie foods and food-seeking behaviour, in addition to resetting the basal metabolic rate to a lower level.

Classification
Obesity is classified according to BMI (see box 1).

Since 1980, rates of obesity have risen inexorably in the developed world. This coincided with increasing calorific consumption, for example, from 2,200kcal per day to more than 2,700kcal per day in US males. Most of these extra calories come from either refined sugar or high fructose corn syrup. 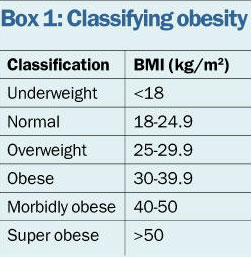 Although BMI >30 is the accepted definition of obesity, care should be taken in patients with a high muscle mass, such as body builders.

BMI in these subjects does not adjust for exaggerated muscle mass and could give a falsely high estimate for the level of obesity. This is why BMI should be used in conjunction with a clinical estimate of body build, that is, does the patient have normal muscle mass for their age and sex?

In patients who have been diagnosed with obesity by these criteria, the next factor to assess is the distribution of their obesity. Is the adipose tissue centrally distributed, as in most male subjects, or is the excess fat around the legs and hips, as is more common in females?

This differentiation between the apple (central) or pear (hips/legs) shape is crucial in the assessment of the likely risks caused by the excess fat. In patients with a central distribution of fat, such as the typical 'beer belly' of a male, the risk of metabolic syndrome is much higher.

Ethnic differences are also important in the risk of developing obesity-related complications. US data show that black and Hispanic subjects have a higher risk of becoming obese than white patients.

Some common obesity-related comorbidities and their estimated RRs for a patient with a BMI of 36 are shown in box 2. These increase as BMI rises and are further accentuated by central distribution of obesity, male gender, age and ethnicity.

In addition, up to half of these patients will have had recent treatment for depression. They have poorer quality of life and their life expectancy is reduced by nine years compared to healthy weight subjects. 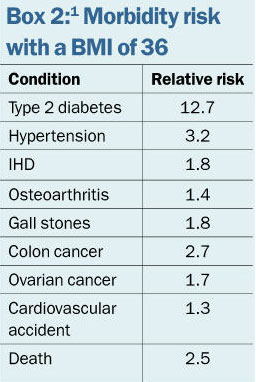 Treatment of obesity is by dietetic and lifestyle changes, medical treatment or bariatric surgery.

Although diet and exercise are the mainstay of the government drive to halt the rise in obesity, they have been shown to have a disappointing long-term effect on weight regulation.

Ultra low-calorie diets should be used with caution because they accentuate a significant metabolic defence against weight loss, leading to chronically attenuated satiety, significant reduction in basal metabolic rate and a high chance of a weight rebound to higher than pre-diet levels.

Most diet and exercise regimens report weight loss of only 2-5kg. Some recent studies suggest that reducing carbohydrate intake to a much lower proportion of total calories consumed may be as good as, or better than, calorie restriction diets. There is good evidence that exercise alone has little impact on weight, but may be of benefit to prevent weight regain after it has been lost.

Medical treatment
Orlistat is the only medical treatment currently licensed to help weight loss. This pancreatic lipase inhibitor impairs the absorption of ingested fat. The drug is designed to encourage the enforcement of a very low-fat diet through the side-effect of steatorrhoea if fat is eaten.

Many patients tolerate this drug poorly and are non-compliant. Those who can tolerate it long-term may lose approximately 5kg in a year. 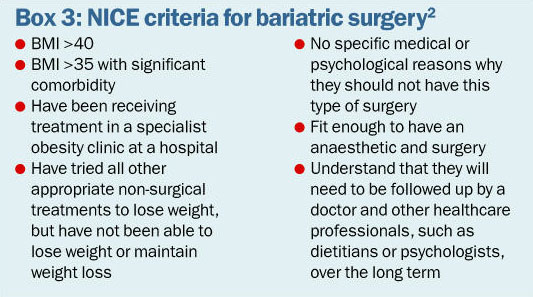 Previous guidelines stated a lower age limit of 18 years, but this has been amended, so adolescents can now be considered for treatment.3

There are three main procedures offered by most bariatric units - gastric bypass, sleeve gastrectomy and gastric banding. All procedures should be done laparoscopically.

Surgeons who carry out bariatric surgery should be performing more than 50 cases per year and be part of a team comprising a nurse specialist, dietitian, endocrinologist, psychologist and anaesthetist. They should be able to offer the most appropriate of these procedures to their patients.

Bariatric surgery can be effective if offered to appropriate patients in a specialist unit.

Following sleeve gastrectomy or gastric bypass, diabetes, hypertension and sleep apnoea are resolved or significantly improved in 85% of patients, with diabetes sometimes resolved within days of surgery.

Long-term follow-up is essential to support the patient. Continued dietetic and lifestyle education has been shown to help maintain weight loss. Patients should be made aware before surgery that the procedure acts to reset their weight to a lower level and it is then up to them to embrace a healthier, more active lifestyle.

A 43-year-old, married, father of two was referred by his GP for consideration for bariatric surgery, to help him control his weight and improve his general health.

The patient's weight was 152kg and his height 1.85m. He had a BMI of 44. He had a central distribution to his obesity, explaining his development of metabolic syndrome.

The patient had been diagnosed with type 2 diabetes one year previously and was being treated with metformin 500mg twice a day.

In addition to this, he was being treated for hypertension and hypercholesterolaemia.

At initial assessment, it was noted that he might have sleep apnoea (high BP and witnessed apnoeas). He was therefore referred to the respiratory team for sleep studies.

He had a depressive episode following a redundancy and was currently unemployed. He was therefore referred to the psychologist for assessment of his psychological suitability for surgery.

His BP was well controlled and his HbA1c was 6.5mmol/L, indicating that he was clinically optimised for surgery. The psychologist assessed him as a good candidate for surgery.It was agreed by the members of the bariatric surgery team that a gastric bypass would be an appropriate procedure because this was the most effective for resolution of diabetes.

The laparoscopic gastric bypass procedure took approximately 90 minutes to complete. The patient was mobile and tolerating free fluid the day after surgery.

He was discharged from hospital on postoperative day two and was back to normal activities within 10 days of surgery.

At six-month review, he had made significant progress with the help of his gastric bypass. His weight had decreased to 98kg and was on course to settle at about 85kg at 12 months. His diabetes had resolved and did not require medical treatment. He had also stopped treatment for hypertension and was no longer taking statins. He no longer required CPAP therapy.

This meta-analysis of the long-term effectiveness of dieting found that interventions incorporating a reduced-energy diet and exercise were associated with moderate weight loss at six months.

Although there was some regain of weight, the loss could be maintained. The addition of weight-loss medication offered some enhancement in maintaining the loss.

This review of the physiological responses to dieting looked at dieters who regained weight despite following an initially successful diet.

It was suggested that appetite-regulating hormones in the gut might be responsible for this relapse in the long term.

2. NICE. Obesity: the prevention, identification, assessment and management of overweight and obesity in adults and children. CG43. London, NICE, December 2006.

Vaccination of care home residents against COVID-19 will start on 14 December in...

How will the COVID-19 vaccination programme get underway?

Following the MHRA's approval of Pfizer/BioNTech's COVID-19 jab the government has...

NHS must keep doctors who returned in pandemic as overseas supply dries up, says GMC

Doctors who rejoined the NHS workforce in the pandemic must be urged to stay to help...

GP practices are unlikely to receive stocks of COVID-19 vaccine 'for at least another...

The Joint Committee on Vaccination and Immunisation (JCVI) has published a final...

The MHRA has approved the Pfizer/BioNTech COVID-19 vaccine for use in the UK and...