NHS officials in Scotland are advertising general practice careers through social media to urge GPs working abroad to come back to the UK, in a bid to tackle the workforce crisis.

The advert directs GPs to information about Scotland's GP induction and returners scheme. It asks: 'Are you missing Scotland? Are you contemplating returning? Now is a good time – coming back to general practice in Scotland couldn’t be easier! 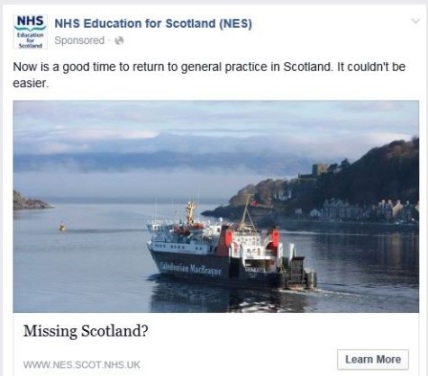 'Scotland needs its trained GPs back. With the development of a new GMS contract underway, more investment in general practice, access to the NHS pension scheme and a health service that is arguably one of the best in the world, there is much to commend working as a general practitioner in Scotland.'

NES has turned to social media in the face of a growing workforce crisis, with the BMA and RCGP predicting a shortfall of 740 GPs by 2020. More than 40 GP practices in Scotland are now being run directly by health boards, as partners quit or retire and struggle to find replacements.

Scotland - like England - faces a significant shortfall in GP trainee recruitment, with around 80% of posts available in the country filled. Meanwhile, more than a third of GPs in Scotland say their current workload is unmanageable, according to a recent poll by a political party.

A spokeswoman for NES said: 'Our social media strategy is one aspect of our communications plan to support the reinvigoration of Scotland’s GP Returner programme.

'The advert is not exclusively targeting Scottish GPs but rather individuals affiliated with a UK medical school and the in-country (Australia, Canada and New Zealand) equivalent of the RCGP.'

People living in Australia, Canada and New Zealand who describe themselves in their Facebook profile as a GP or physician, and who are affiliated to a UK medical school or the country's equivalent of the RCGP are likely to see the advert.