A total of 59.3% of patients thought to have dementia in the UK have been given a formal diagnosis, GP analysis of Health and Social Care Information Centre figures reveals.

But the DES was condemned as being potentially harmful to patients and the benefit of early diagnosis has been brought into question. 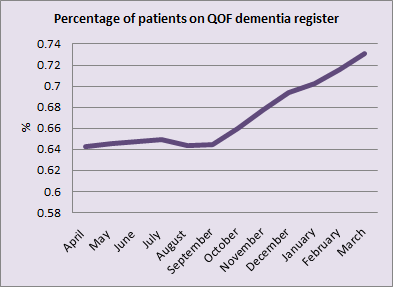 The number of patients on GP practice dementia registers has risen from 336,445 to 400,707 in England since the DES came into action in October 2014.

Prevalence had stayed around 0.65% of all patients in England in the six months preceding the introduction of the DES, but has risen steadily since, now standing at 0.73%.

It is basing its estimates on the 2013 Cognitive Function and Ageing Study (CFAS II) study, which it says now represents the ‘best science’ available.

This means that the ongoing ambition will now be for 441,530 people to have received an official diagnosis instead of the 450,000 previously calculated, and increases to 60.8% the proportion of people in England estimated to have dementia who have been formally diagnosed.

NHS England is also calculating local estimates of dementia to ‘inform CCG planning guidance’ on dementia, which will take into account age and gender statistics of each region.

The prime minister’s Challenge on Dementia 2020, launched in February, says that the two-thirds ambition is still a priority for NHS England, which should ‘continue to make measurable progress towards achieving this in 2015/16’.