In 1991 the Conservative government introduced the purchaser/provider split in the NHS. Health authorities began to commission care and GP fundholding was introduced.

Fundholding provided GPs with budgets with which they could buy elective and community care for their patients and practices were able to retain any savings they made to improve services. 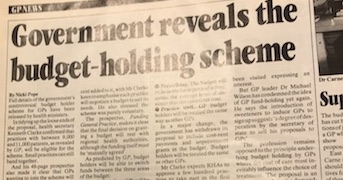 GP reveals details of how fundholding will work

Fundholding was not compulsory and applicants initially had to meet a number of criteria to enter into the scheme. Smaller practices could group together to form fundholding consortia. The scheme was changed several times to make it more attractive to non-participating practices and expand the number of services that could be commissioned.

In 1998 the new Labour government abolished GP fundholding, although it retained the purchaser/provider split. At the time the initiative ended, 57% of GPs were fundholders.1

Fundholding and family health authorities were replaced in 1999 with 481 primary care groups (PCGs), which later became primary care trusts (PCTs). The government wanted GPs to play a central role in these new commissioning organisations, so that knowledge and experience gained through fundholding were not lost. 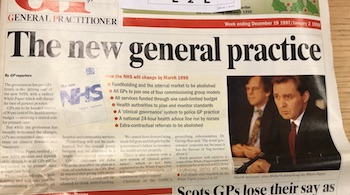 In 1999 the devolved governments were established in Scotland, Wales and Northern Ireland, which took on responsibility for health policy and spending.

The NHS Plan, published in 2000, was Labour’s ten-year plan for the NHS in England that committed substantial investment to the service.

It promised more staff, extra hospital beds, over 100 new hospitals (most of which would be delivered via the private finance initiative), investment in GP premises and IT and reduced waiting times. The Department of Health would set national standards and introduce regular inspections of all health bodies, while NICE would end the postcode lottery of access to medicines.

The plan also set the target that patients would eventually be able to have a GP appointment within 48 hours and said there would be a new quality-based contract for general practice. Doctors would also be required to participate in annual appraisal and clinical audit, while nurses would be able to train to become prescribers.

There’s little doubt that the increased investment improved the service. More doctors and nurses were recruited, waiting times fell and cancer survival rates improved. However in 2009, when assessing the impact of the plan, the BMA said that funding had been concentrated on access and choice rather than the people who needed it most. Others highlighted a lack of progress on moving services out of hospitals and a failure to prioritise public health.

There is also still concern about the true cost of PFI - a National Audit Office report earlier this year found little evidence that the scheme had delivered any financial benefits.2

A new GMS contract was introduced across the UK in April 2004, after overwhelming support in a ballot of the profession. In a significant change, the new contract was practice-based, rather than GP-based.

The contract scrapped the red book system of paying GPs and introduced three main funding streams - the global sum, QOF and enhanced services. Separate funding was available for premises improvement and IT.

The other big change was that practices would be able to opt-out of providing out-of-hours services, with responsibility switching to primary care organisations if they did so. 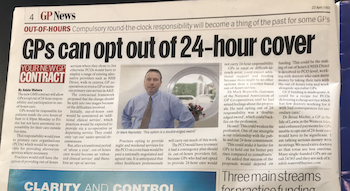 GP reveals details of the plans for out-of-hours

Many practices already organised their out-of-hours provision using co-ops, but most welcomed the opportunity to be relieved of this. Practices that opted out would see their income reduced by £6,000 per GP and, unsurprisingly, 90% of GPs decided to do so.

Much has been made of the fact that the government underestimated the cost of out-of-hours, but the figures involved were based on the payments GPs had been receiving for the work. Problems that occured after primary care organisations took control, and the significant escalation in cost, showed how much out of hours had relied on the goodwill of GPs prior to the 2004 contract.

The contract did deliver an increase in income for GPs, largely as a result of the incentive payments associated with the QOF. It also led to significant changes in general practice, not least of which was the rise in the number of salaried GPs and practice nurses as the contract was now practice-based.

PMS contracts, which had been piloted since 1998, were also adopted as a permanent arrangement and by 2006 around 40% of practices were PMS.

Under practice-based commissioning, which was introduced in 2005, practices were given an indicative budget to commission services. They received an agreed share of any efficiency savings they made, which they had to spend on developing new services.

The 2012 Health and Social Care Act introduced the most wide-ranging reform of the NHS since it was founded. The changes came into effect on 1 April 2013 and completely transformed how the NHS in England operated.

Meanwhile revalidation for doctors was introduced in December 2012 and CQC inspection of general practices began in October 2014.

Shortly after the 2004 contract was introduced the government came to the conclusion it was paying GPs too much and subsequent years of contract negotiations seemed to focus on getting practices to do more work for little, if any, more money.

By 2012 average income for partners had fallen 14% in real terms since 2004/5 and 20% from its post-contract peak in 2005/6. The new coalition government’s policy of austerity also began to bite as contract uplifts were severely limited, while the decision to restrict increases in health spending generally impacted on GP workload, recruitment and retention.

In 2014, health secretary Jeremy Hunt pledged to ‘train and retain’ 5,000 new GPs by 2020 in a bid to address a growing workforce crisis. However latest figures show the GP workforce is still falling, and Mr Hunt himself has admitted the government is struggling to meet the target. Scotland, Wales and Northern Ireland face similar recruitment problems.

Sprialling indemnity costs have contributed to recruitment and retention issues and deterred many GPs from working more sessions, or taking on shifts in out-of-hours settings. A state-backed indemnity scheme is due to be introduced in England in April 2019 to help address this issue, with Scotland and Wales suggesting they will follow suit, but there is so far little detail on how the scheme will work.

The GP Forward View, published in 2016, promised a £2.4bn a year increase in funding for general practice in England by 2020/21, which would take its share of the NHS budget to 10%. However, two years into the initiative it is unclear whether the funding is being delivered, or if it being spent on programmes that are evidence-based or effective.

General practice in the four UK countries also began to take quite different paths since the early part of this decade. In 2016 Scotland abolished the QOF and a new GP contract came into effect in April this year. The Scottish GP contract has signifiicantly changed how practices are funded. It aims to refocus the GPs role and removes the burden of premises, with the hope of reducing workload, making general practice more sustainable and boosting recruitment and retention.

Locums will be guaranteed full death-in-service rights during the coronavirus outbreak...

GPs have demanded clear government advice on how doctors should approach high-risk...

Dr Toni Hazell provides tips on how to triage patients with symptoms of possible...

Failure to provide death-in-service guarantees to locum GPs during the coronavirus...

The government must act urgently to protect NHS staff amid a wave of COVID-19 deaths...