The 1970s saw significant changes for GPs, but general practice then entered a relatively stable period - until the government decided to impose the 1990 GP contract.

The 1970s saw a significant expansion of the number of health centres and group practice premises. Health centres, which were built by local authorities to house GPs alongside nurses, health visitors, dentists and other services, were popular in parts of the country, particularly deprived areas.

The 1966 family doctor charter had encouraged the move towards group practice via incentives and also introduced direct reimbursement for premises costs, so increasing number of GPs began to self-finance premises improvements.

A survey carried out by the BMA Planning Unit showed the impact of the family doctor charter – young doctors were mainly choosing to work in group practices and the number of single-handed GPs was starting to fall.1

The survey also found that group practices in privately-owned premises spent more of their money on their practices, were more likely to use appointment systems and tended to make more efficient use of premises and staff.

General practice was at the forefront of embracing the use of computers in the NHS. The first GP to use a computer in consultations was Dr John Preece, from Whipton near Exeter, in 1970. In 1975 the health centre at Ottery St Mary, also near Exeter, became the world's first paperless general practice. The practice also developed the computer printed prescription form.2

At the start of the 1970s it was possible for doctors to become a GP without any postgraduate training, but in 1979 legislation was passed that introduced mandatory training. From February 1981 a year in general practice became compulsory for all new prinicpals and from 1982 the full three years were phased in.3

The number of trainees rose steadily during the 1970s. By the mid 1980s there were over 2,000 in the general practice year alone, more than one-third of these were women, which reflected the proportion of women in medical school. General practice was one of the most popular career choices in medicine.3

As the 1970s progressed, there were concerns that general practice had not seen the same increase in spending as other parts of the health service. In 1979 the BMA’s General Medical Services Committee (what would now be the GPC) produced a report arguing for changes to the contract, particularly around remuneration for out-of-hours work and additional item of service fees, along with increased reimbursement for staff.4

However, little happened on the political stage until a green paper in 1986 and a white paper in 1987 set out how the government planned to change primary care.

The government proposed introducing new payments to encourage preventive medicine, greater efficiency, services such as immunisation and cervical cytology and inner-city practice. It also wanted to see increased competition and patients being given more information and choice. Funds for direct reimbursement for staff and premises would be limited, but the scheme would be extended so that there would be no restriction on the type or number of staff that a practice could employ.5

An additional £170m would be pumped into the service, which would come from abolishing free dental examinations and eye tests.

The 1987 white paper formed the basis for the 1990 GP contract, which was imposed by health secretary Ken Clarke after being rejected in a ballot of the profession. The contract’s aim was to make the terms of service more specific and link remuneration to performance.

Along with the measures detailed above, the contract required GPs to undertake health checks with newly-registered patients, those over 75 and patients who had not seen a GP within three years. A local directory of family doctors was produced and GPs had to provide practice leaflets explaining the services they provided.

New fees and allowances, which included child health surveillance and minor surgery services, were introduced, while others, including the vocational training and group practice allowances were abolished. 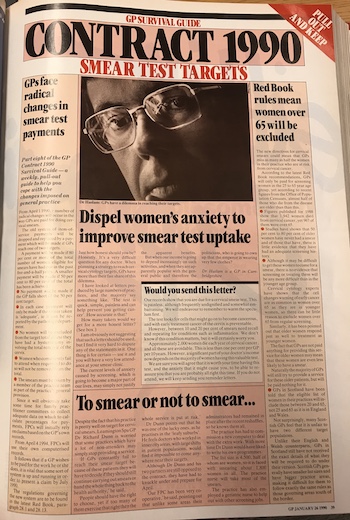 Professor Sir David Haslam, now chair of NICE, offers advice on how to meet the new cervical cytology targets in GP in January 1990.

In March 1990 GP reported that hundreds of GPs, particularly those in their 60s, had decided to retire on the eve of the new contract’s introduction. Among the leavers was Liverpool GP and GMSC member Dr Mervyn Goodman. He told GP: ‘I don’t approve of targets and the impression I see from doctors and the attitude of the government has meant that doctors are saying not what can be done for the patient, but how can I work the system.’ 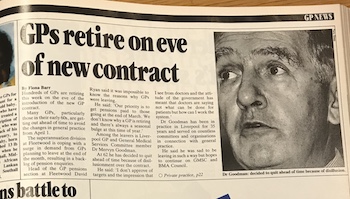 A Labour government would offer patients the chance to see 'the same doctor each...

There are strong indications the UK faces a dangerous 'twindemic' of COVID-19 and...