Our investigations revealed numerous examples of treatments being rationed across the UK.

Although GPs may remember 2012 principally for the infamous Health and Social Care Act, a war of words also erupted over the most fundamental question in the health service: what should the NHS pay for?

Pressure on NHS budgets began to bite and GP uncovered multiple examples of NHS managers unfairly rationing care. It led to a furious political row that rumbles on to this day.

Reports by the DH and the Nuffield Trust both concluded that the NHS should not use explicit blacklists of banned treatments to ration NHS care. Nuffield Trust head of policy Dr Judith Smith said: ‘The current system for defining what is in and out of the NHS "offer" is far from ideal.’

In June, GP exclusively revealed that 90% of PCTs in England were limiting GP referrals for ‘non-urgent’ procedures, including cataract, bariatric and joint surgery.

Angry GPs accused PCTs of introducing ‘waiting lists by the back door’ by blocking patients from joining the wait for treatment.

The investigation garnered huge interest from the national media. In response, the then health secretary Andrew Lansley denounced PCTs’ actions as ‘unacceptable’ and promised to act if evidence was presented. ‘There have been instances where PCTs have put blanket bans on treatments and that is unacceptable,’ he said. A few days later, GP published findings showing how PCTs aimed to save £100m from such restrictions. No DH review came.

Meanwhile, during prime minister’s questions, the opposition and the government sparred over the issue. Foreign secretary William Hague, standing in for David Cameron, said: ‘It is totally unacceptable if trusts are rationing on the grounds of financial considerations.’

Labour subsequently called for ‘an immediate review of rationing in the NHS’, forcing Mr Lansley to investigate evidence suggesting NHS Sussex was denying cataract operations because of cost.

In August, NHS chief executive Sir David Nicholson wrote to SHAs and PCTs setting out how they should remove NICE-backed drugs from local blacklists.

But the issue refused to be buried. A GP survey of 682 GPs said PCTs were ignoring a government ban on rationing treatments based on cost (see graphs below). 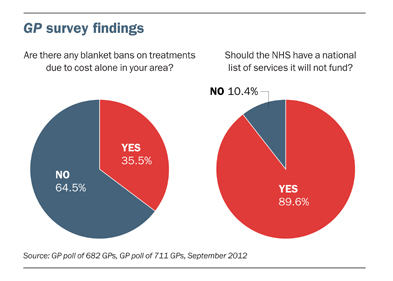 The next day, GP revealed that an independent study from Imperial College London had found almost half of PCTs were unfairly restricting access to cataract surgery.

The president of the Royal College of Ophthalmologists, Professor Harminder Dua, told GP there was now clear evidence of rationing ‘driven by financial considerations’.

Within days, the DH announced that NHS medical director Professor Sir Bruce Keogh would write to PCT chief executives and the wider NHS warning that it is ‘unacceptable’ and ‘unethical’ to blanket ban treatment.

The story continued in October, when a report from the NHS Information Centre suggested the NHS in England might be failing to provide medicines that NICE had approved as cost-effective.

Finally, by November, another GP investigation revealed how GPs increasingly had to fight to obtain NHS treatment for their patients because managers are raising limits on access to care.

As 2012 drew to a close, attention switched to how GPs as commissioners would deal with rationing. Speaking to GP, Lord Howe – the only health minister left in office following the autumn Cabinet reshuffle – denied GPs were being set up to take the rap for rationing treatment under the reformed NHS.

With budgets as tight as ever, commissioners – whether NHS managers or GPs – will face the same dilemma in 2013: how far do the purse strings stretch in today’s NHS?