This year has been tougher than ever for the GP contract, but changes due in 2013 could spark serious unrest.

Attempts by senior members of the GPC to predict GP contract developments for 2012 met with varying levels of success.
Gazing into his crystal ball in January, GPC chairman Dr Laurence Buckman said 2012 would bring an increasingly ‘economically hostile’ environment for the profession – an undeniably accurate forecast.

In our final print issue of 2012, we reported findings from an investigation that showed swings of up to £30,000 per average practice in parts of the UK in income from local enhanced services.

GPs made redundant
In November, GP reported that many practices had been forced to lay off salaried GPs and other staff, cut use of locums and reduce services as profits slumped in the past 12 months. Take-home pay fell in 2012 for 65% of 309 GPs who took part in our poll (see graphics below). 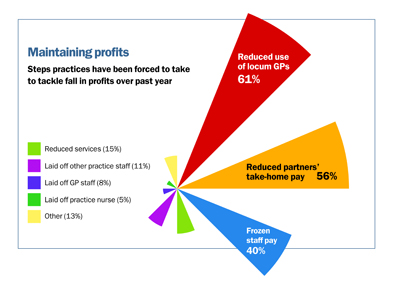 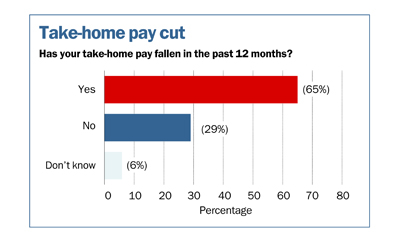 Official NHS data showed earlier this year that GP income fell 1.8% in 2010/11, a fall that is likely to have become steeper in subsequent years.

A prediction that proved less accurate came from another GPC negotiator, who aired the view that MPIG, the deal more than 60% of GP practices across the UK rely on to top up their core pay, would last another 20 years.

In November, after GMS contract talks between the GPC and NHS Employers collapsed, the DH announced plans to impose sweeping contract changes that would axe MPIG over seven years from 2014.

The plans will create six-figure swings in income, alongside QOF cuts that could cost practices £30,000. The GPC has denied letting the profession down by failing to reach a deal with the DH. Neither side admits to being first to walk out on talks – both are pointing at each other, saying: ‘It was them.’

Scottish contract deal
Nobody can accuse GPC Scotland negotiators of letting the profession down, however. While a negotiated UK contract deal looks further away than ever, after the DH published a 12-week consultation detailing its plans to alter the 2013/14 contract unilaterally, Scotland’s health department reached an agreement with the country’s GP leaders.

Half of the organisational indicators that the UK government wants to strip from the QOF, forcing GPs to do extra work to retain the income, have been added to core funding in Scotland. These targets are worth £10,000 per average practice – a significant concession at a time when funding is increasingly tight.

For the 35% of GP practices in England on PMS contracts, uncertainty also looms. The DH plans to carry out the PMS review to end all PMS reviews, with the NHS Commissioning Board asked to overhaul the deals to ‘achieve equitable and fair core funding between GMS and PMS contractors on the basis of a standard weighted capitation funding formula’.
This comes on top of PMS reviews that have led to six-figure swings in PMS practices’ income in parts of the country this year.

In 2013, things look unlikely to settle into a smoother ride for general practice – in fact, many may need to be planning for the future and tightening their belts more than ever in anticipation of heavy swings in funding yet to come. The BMA has not ruled out industrial action and the profession may just be pressed into extreme measures.

A new system that will allow patients to register with a GP surgery online is being...

Which parts of England have the highest and lowest GP patient satisfaction?

Patient satisfaction with GP services varies widely between PCN and ICS areas across...

During August we’re bringing you some of the best interviews from series one of the...