This article describes the three most common types of nail changes to present to primary and secondary care: fungal nail disease, onycholysis and digital myxoid cysts.

Although these are relatively benign conditions, it is important to be aware of melanoma of the nail and to be able to differentiate this from benign melanonychia. 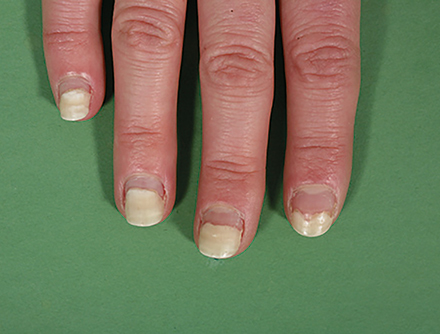 Onycholysis can be classified as primary/idiopathic and secondary. Primary onycholysis is commonly seen in women who take great care over their nails. Significant onycholysis is seen on a background of long, manicured nails (figure 1). Active cleaning, often with sharp instruments, increases the onycholysis. Box 1 outlines the causes of secondary onycholysis.

Melanonychia ('black nail') can be diffuse or linear and single or multiple. Melanocytes are present in the nail matrix, but not in the nail bed. If active, they can cause a longitudinal brown-black band, longitudinal melanonychia. The more proximal their origin, the more superficial the melanin in the nail plate.

There are five main types of onychomycosis:

Laboratory confirmation of a clinical diagnosis should be obtained before starting treatment. Microscopy and culture can take two to six weeks.3

The site should be cleaned with 70% ethanol before sample collection. Nail clippers can be used to obtain clippings from the nail plate and a scalpel blade to take scrapings from subungual hyperkeratosis.

For proximal subungual onychomycosis, a blade is used to pare away the healthy nail plate and take infected material from the nail plate closest to the lunula. Culture should be repeated if clinical suspicion is high and the first culture is negative – false negative rates can be up to 30%.3

Distal or distal lateral detachment of the nail plate from its bed, onycholysis begins laterally and proceeds proximally. When separation begins proximally, it is called onychomadesis. Women are predominantly affected.

Onycholysis creates a subungual space that gathers dirt and debris. Water accumulates and can predispose to secondary infection by bacteria and yeasts. Pseudomonas infection is common, with pain and green discoloration of the nail.

Distinguishing between subungual melanoma and linear melanonychia is difficult. The most common cause of a pigmented nail lesion is a subungual haematoma, which is easily distinguished from linear melanonychia because it usually migrates distally and its proximal margin is gently curved in one transverse axis.

Myxoid cysts are solitary or, rarely, multiple, skin-coloured/translucent, dome-shaped nodules approximately 5mm in diameter. They can be superficial, located near the proximal nail fold, or deep, located on the dorsum of the finger near the distal interphalangeal joint.

They contain a clear gelatinous/mucoid fluid, which may escape spontaneously or following trauma. When the cyst is situated on the proximal nail fold, it can result in nail plate changes secondary to pressure on the germinal matrix. This results in the formation of a longitudinal groove in the nail plate.

A cyst at the proximal nail fold may exude its contents into the cul-de-sac beneath the nail fold (figure 2). A rare variant is located beneath the nail matrix, producing convex distortion of the matrix and transverse overcurvature of the nail plate. Clinical features are most useful in diagnosis. Sterile puncture of the cyst, to demonstrate its mucoid contents, is useful to confirm clinical suspicion. Radiological examinations are unnecessary. 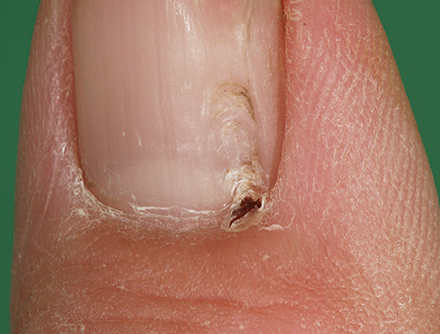 Topical treatments are not often effective because of lack of penetration through the dorsal plate. Monotherapy with topical antifungals can be used for superficial white onychomycosis and early distal and lateral subungual onychomycosis. Children's nails may respond to topical treatment because they are thinner.

The mainstay of treatment is systemic antifungals, although mycological cure rates are low, at only 30%.4 Terbinafine anditraconazole are the two main systemics indicated for treatment of onychomycosis (see box 3). Terbinafine is considered as first line because it results in higher cure rates and has fewer drug interactions.

After three months of treatment, most toenails still look abnormal. However, if therapy has been successful, normal nail will be seen emerging proximal to the dystrophic nail.

If the clinical diagnosis is benign linear melanonychia, appropriate management would include a photograph for monitoring and follow-up by patient self-examination and in some cases, physician review.

If there is any suspicion of subungual melanoma, an urgent diagnostic biopsy must be taken from the nail matrix.

There is no gold standard treatment option for digital myxoid cysts, but various treatment modalities are available (see box 4).